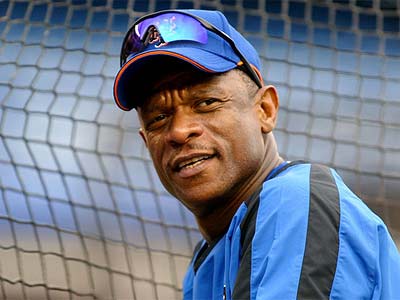 Arlington (TX)- Sources close to the organization are reporting that the Texas Rangers have signed former Athletic, Yankee, Blue Jay, Padre, Angel, Met, Red Sox, Dodger, Newark Bear, and San Diego Surf Dawg’s outfielder Rickey Henderson to a minor league contract.
Henderson, 50, will be suiting up for the Rangers in his 27th professional season the same summer that he will be inducted into the Major League Baseball Hall of Fame in Cooperstown, New York.

Henderson held a press conference beside a 20-foot bronze statue of himself outside his home early Wednesday morning, fielding questions completely nude except his favorite pair of “Rickey socks” and a “#1 Grandpa!” hat.

“Rickey told you he ain’t done. Rickey is gonna steal more bases than (Malins shortstop Hanley) Ramirez and (Mets shortstop José) Reyes times two!” Henderson told reporters.
Henderson, Major League Baseball’s all-time leader in stolen bases, runs scored, leadoff home runs, women slept with, and references to oneself in the third person, last played in the MLB for the Los Angeles Dodgers in 2003. شرح لعبه البوكر That year, he batted .208 with two home runs, three stolen bases, and 15 references to his own genitalia.
“This is Rickey on behalf of Rickey. You know that Rickey goin’ to bring it,” Henderson said while awkwardly rubbing the statue of himself. “Ain’t nobody like Rickey.”
Henderson then wrestled a camera away from a nearby reporter and held it in the air while proclaiming “Rickey’s the best! Rickey’s the best!” He proceeded to yell “I”m keeping this! موقع ٣٦٥ ” before french kissing his statue and going back into his home. كيف تربح في البوكر

One thought on “Rickey a Ranger”