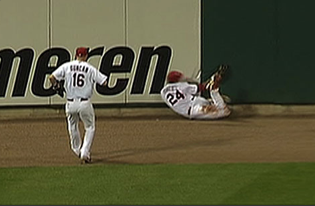 After colliding head first into the center field wall and being carted off the field, Rick Ankiel was released from the hospital this morning with no fractures or any serious injuries. Surprisingly.
He will rejoin the team today for their second of three games against the Phillies, although he will not play. Rick, on behalf of baseball fans everywhere, we are very thankful that you are going to be OK after what appeared to be a scary moment for not only Cardinal Nation, but all of Major League Baseball.

Now, with that being said…

Read the following in the tune of the ‘George of the Jungle’ theme song: 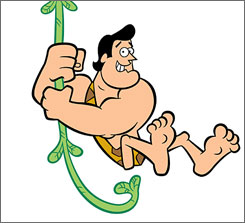 Rick, Rick,
Rick of the Outfield
Hustles more than all,
(AHHHHH!)
Watch out for that wall!

Rick, Rick,
Rick of the Outfield,
Goes hard against the wall,
(AHHHHH!)
Hold on to that ball!

2 thoughts on “Rick of the Outfield”