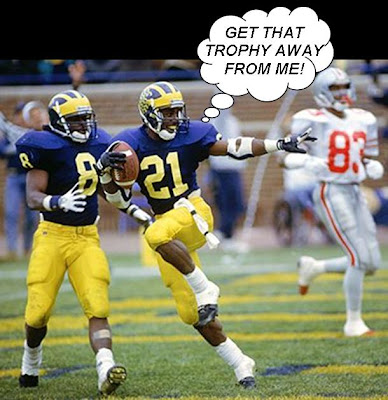 On Saturday night, every Texas fan had a bittersweet taste in their mouth. Sure, Colt ” The Golden Child” McCoy didn’t win the Heisman (again), but that also means that he won’t get hit by the Heisman Curse (he’ll only get hit by Rolando McClain).

Some readers out there are probably saying “Chip, you a foo… Dey ain’t no Himan Curf.” And to those Alabama fans, I would say that when it comes to bowl games, there is definitely a recent history of a Heisman Curse. (And yes, being in a relationship with a Kardashian is a curse… Just ask Lamar)

Although, I feel like Alabama could easily end the current trend of Heisman winners*, I am not willing to put a cent on the Crimson Tide for this very reason. We all know Ingram** could run all over Texas like an A&M Quarterback, but he could also pull a Troy Smith and completely fail at being in a Championship.

Being a firm believer of Witchcraft and Wizardry, I am excited to see what the future of the Heisman Curse holds. Could it become as prestigious as the Madden Curse or the Cub’s Curse of the Billy Goat? As an SEC fan, I hope that Alabama can pull it out, but if not… then it looks like there may be a little bit of VooDoo in that trophy.

*Note: I do not think Ingram should have the Heisman because his defense won the games… Not him. That’s like giving Tebow a Quarterbacking award… oh wait.
**Note: Toby Gerhart should have won.

One thought on “Reverse The Curse”