I was in fourth grade in February of 2000. That was when, one day at lunch, I remember the supervisors appearing rather distraught as they stood secluded on one side of the lunch room, not paying particular attention to what was going on around them. That was when one of them, Tammy I think her name was, ambled over to our table.

“Derrick Thomas was just in a very serious car accident,” she said. “He might not make it.”

You might find this hard to believe, but there was a time, not so long ago in fact, that the Chiefs meant as much to Kansas City as any team could mean to any city. Starting in 1991, the Chiefs sold out EVERY single home game for 18 straight years. In the 90s, there was no tougher place to play on Sunday afternoons than Arrowhead Stadium.

The party started early in the a.m., when the first few tailgaters fired up their grills to make some KC bar-b-que, continued as the parking lot filled with a red and yellow sea of tents, buses and trailers, and rolled on as a B-2 bomber would fly over the stadium right as the crowd, in unison, finished the Star-Spangled Banner with “…and the home of the CHIIIIIIIIIIEEEEEFS.” Then, Tony Dipardo would fire up his band, Rolling Stones’ “Start Me Up” would blare over the loudspeakers, and opposing teams would thoroughly despise the next three hours of their existence as the best defense of the decade would pound them and the loudest stadium in the NFL would taunt them.

Opposing players hated it. I remember a friend telling about a time that he saw Broncos linebacker Bill Romanowski yell “I [expletive] hate Kansas City!” as he spit into the air before a game.

Yes, football in Kansas City was everything. The Chiefs of the 90s won their conference three times, and, if my memory serves me correctly, they never experienced a sub-.500 team the entire decade. They made the playoffs six straight years and seven of eight years. Without fail, the BBQ, the Home of the CHIIIIIIIEEEEEFS, the ‘We Just Beat the Hell out of You,’ and the defense would captivate the entire city every Sunday.

And at the epicenter of all of it was Derrick Thomas.

The way I remember that day, though, every single kid at my table was immediately distraught. I cried, I think.

No athlete had been as beloved by Kansas City since Len Dawson lead the team to Super Bowls I and IV. Maybe it’s an emotion pick, but I’d say we loved DT more, because he was more tragic. He had come from a rough background, had his share of issues early in his career, then grew up before our eyes, with us.

And he gave back. Boy, did he give back.

I lived near a few bad neighborhoods in my Kansas City suburb, and I remember that he had done a fair amount of work in my community. A lot of the kids and parents at my school knew him, had worked with him. I’m sure there are thousands of kids my age living in Kansas City right now that have their own Derrick Thomas story. It’s hard to say which would’ve been kept and which would’ve been rid of, were the city forced to pick between Derrick Thomas and Ollie Gates.

That’s why the city reacted the way it did when he died just a few short days later, on this day 10 years ago: February 8th, 2000. That’s why they showed up in the thousands to that same Arrowhead Stadium they’d watched him play in so many times and waited in lines for hours just to pass his casket and pay their final respects. That’s why there was a candlelight vigil, and fans’ personal Derrick Thomas memorabilia being placed together. Everyone pushed their favorite Derrick Thomas stories and mementos into big piles in an attempt to bring him back.

Kids, even younger than me, cried and cried as they wiped their tears with their number 58 jerseys.

It was that day that we knew that the next time Tony DiPardo fired up his band, Number 58 wasn’t going to be standing cooly on the sidelines, wearing his signature grey undershirt and red bandana, ready to take us to another place.

My memories of Derrick Thomas aren’t as great as others. So I’m going to link to a few columns and other things that I think even the average sports fan would find touching. Columns and things written and put together  by those that knew DT. The day after such a heart-warming story swept the football world as the Saints defied, well, everything and won the Super Bowl, we could use more non-talking head analysis.

So, instead of reading some overreaction column about how one bad Peyton Manning pass somehow ruined his legacy, read about a man who’s impact jumps off the pages of things written about him.

You don’t have to read all of them. I have, but I read everything. 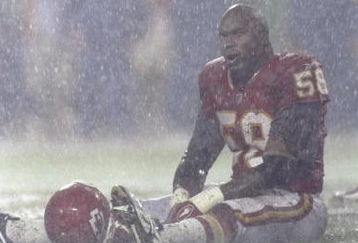