No, not the actor from Airplane, this guy:

Karim Abdul-Jabbar
Karim is one of those guys I would have erased from my memory bank years ago if it wasn’t for the greatness of a little thing I like to call NFL Blitz for Nintendo 64. Other people like to call it that too, so I hear. While I usually stick with the Browns and my boy, the unstoppable Tim Couch (yes, that’s his wife), the combination of Abdul-Jabbar and Dan Marino is one that always strikes fear in my eyes as an opponent. I’m pretty sure it’s just because he shares his name, number, and college with the leading scorer in NBA history, but Karim put together some nice stats during his first few seasons in the NFL in attempts to show the world there was room for two Karim Abdul-Jabbars in this great country of ours. Lets take a look: 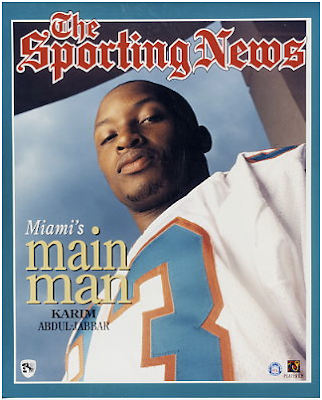 Now that we’ve taken a very brief look at his playing career, let’s dive into the little legal issue he had with the other Kareem Abdul-Jabbar. I’ve never understood the whole “Abdul-Jabbar-Shareef-Abdur-Rahim-El-Amin” Muslim name change thing but that’s another day, another story.

Anyway, the other Kareem filed a lawsuit against the football playing Karim because there were too many similarities between the two and he felt that Karim was making profits off the name. Lame if you ask me.

Unfortunately I was unable to find any game footage of Karim. However, if you would like to waste 3 minutes of your life watching some idiot record himself playing Blitz, you can see a virtual rendition of Karim. He actually scores on the first play after some nifty moves.

2 thoughts on “Random Athlete of the Month – November”