Skip to content
MLB Random Athlete of the Month
March 16, 2009 Austin
When you think of random athletes, who is the first person that comes to mind?

This month’s random athlete is:

I’ll give you a moment to take this one in.

I know this is two consecutive months of our random athlete being a baseball player. But like the Montreal Expos with the 12th pick in the 1987 MLB Draft, how could I NOT take Delino Lamont Deshields?!

Of course, our man, Delino could be considered a multi-sport athlete. Delino was supposed to play point guard for Villanova’s basketball team after high school.

However, lucky for us, ole Delino chose to grace us with his presence in Montreal, Los Angeles, St. Louis, Baltimore, and Chicago over the course of his illustrious career. Last year was his first year to become eligible for the Major League Baseball Hall of Fame.

Unfortunately, he did not get the invite.

But who is to say he won’t? All joking aside, he is BY FAR the best Major Leaguer to ever play the game.* 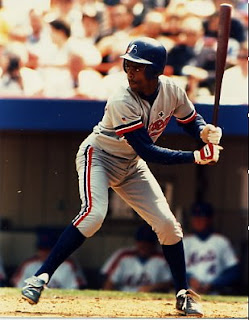 I mean, come on, the man has made history! In 2001, Deshields was the final out of Hideo Nomo’s no hitter. If he doesn’t intentionally get out (because we all no he only got out when he WANTED to get out) at that at bat, Hideo Nomo wouldn’t be the pitcher he is today. So thank you Delino, for your selflessness.

In 2000, Sports Illustrated named Delino the 3rd best athlete to come from the state of Delaware. That’s pretty good considering the amount of profesional athletes they produce in that state every year! (SARCASM) I mean, seriously, it’s Delaware.

(Gah, I’m here trying to fight for your case, Delino… But when you’re from Delaware and you’re not even the best athlete from that state… I mean, you make this really tough on me.)

Delino finished second in voting for the Rookie of the Year Award in 1990. Now, if you ask me, first is the worst and sedond is the best, so TECHNICALLY, Delino Deshields was the best rookie in 1990. So take that, David Justice! Finally Justice has been served! (rim shot) 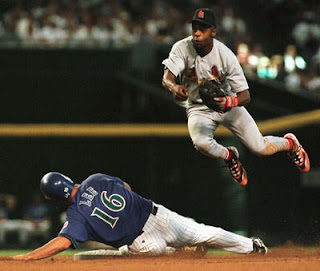 Ok, before I wrap this up, I must admit one thing. Delino, although he had an amazing career, did have a rough stretch at one point in his career from 1994-1996. During this time he played for the Los Angeles Dodgers. It probably wouldn’t have been that big of a deal. But the man he was traded to the Expos for was none other than 3-time Cy Young winner, Pedro Martinez.

That trade is considered to be the worst transaction the Dodgers made in their 50 year history in Los Angeles.

Congratulations Delino Deshields for being honored as Korked Bat’s March 2009 Random Athlete of the Month. You delighted us for so many seasons, and now it’s our turn to give back to you! 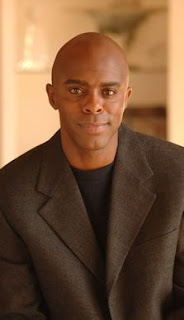 Not to mention, the guy looks like the illegitmate son of Montel Williams and Seal.