For months here at Korked Bats, we’ve had this ongoing series known as the “Random Athlete of the Month” where we pull an obscure figure out of the depths of our memory banks and refresh our readers’ minds on how important/not important that person has been in the sports world. From Delino DeShields to Diamond Dallas Page the theme has been trying to find a name we haven’t heard in quite a while and to make us all say, “Ahhh, I remember him!”

I’ve decided to take a different approach and select Caster Semenya as the official Random Athlete of August 2009. Why, you ask? Because he/she (we’ll get to that in a second) is probably going through a difficult time right now. You may wonder why someone who was just named South Africa’s teenage 800m champion would be the subject of my sympathy, but here’s why:

They are performing chromosome tests to determine if she really is a “she”.

Read that last sentence again. Are you serious? This CAN’T end well. Either we’ve caught a transvestite trying to jeopardize the integrity of the great sport of South African teenage running (talk about a world changer), or even worse, someone has to tell this poor girl:

“Oh, sorry. Yea, we just thought that…ummm, well….we all decided that you look exactly like a..oh gosh, how do I put this…a man. You look like a man so we felt it necessary to test you for that. But no worries, you aren’t. Sorry for the misinterpretation of your physical makeup. Here, take this Christina Aguilera single as a token of our apology.”

We’ve all seen people like this. Usually working behind the counter of a Wendy’s or something. People you wouldn’t bet a dollar either way because you just have no idea what they are. They even made a movie about this socially awkward situation. But even in the movie people are afraid to let the subject in question know that their gender is undetermined by the rest of the world.

Let me just say this. I really hope “she” turns out to be a man because if not, it’s safe to say her self esteem is about as low as the Cowboy’s new $40 million scoreboard.

If there is anything positive to come out of the situation (besides the results) it is the following two quotes from Caster’s father:

“I knew she was different to the others and even now if you speak to her on the telephone you might mistake her for a man. But I used to change her nappy and I know she’s a woman. What better proof do people need?”

“I don’t know what a chromosome is.”

I didn’t make those up.

So let’s make the most out of this situation and turn this into a game. Leave a comment on what you think the gender is. And if you say male and end up being wrong I hope you find it difficult to sleep, you heartless buffoon.

Here are a few more pictures to aid you in your decision: 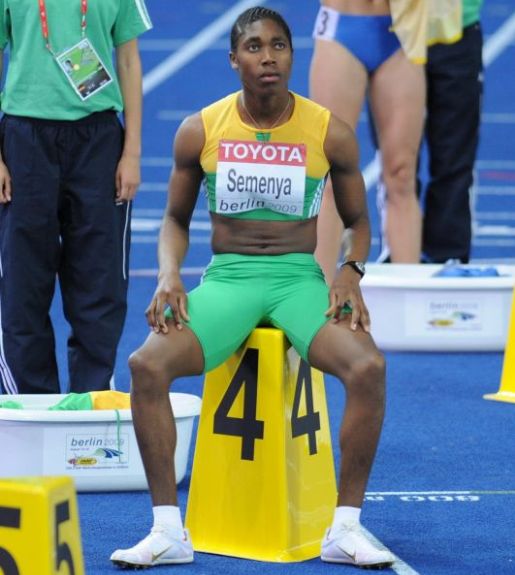 One thought on “Random Athlete of the Month – August”