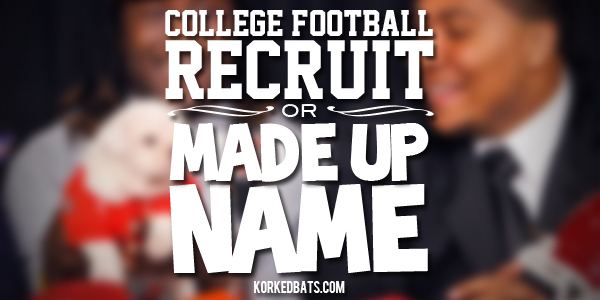 It’s National Signing Day. The one day of the year where it’s ok to pick up 17-year-old high schoolers. With that comes a circus of young, talented athletes with ridiculous names. We figured, why not turn it into a game?

So we bring you a Korked Bats Quiz… College Football Recruit of Made Up Name? We’ll give you the name. You decide whether it’s a real college football recruit or a made up name.The answers are revealed at the bottom of the page.

4. MADE UP – Rocket’s mom refused to drop her maiden name, thus the hyphen.

6. MADE UP – He often gets in legal trouble since his friends call him Meth.

7. MADE UP – Fun Fact: His last name is actually German.

10. MADE UP – Valentine & Butters are actually two words you never want to hear on a first date.

14. MADE UP – Whenever anyone meets him, their egos immediately get crushed.

16. MADE UP – Coaches appreciate the fact that he has gotten less and less soft each year.

20. MADE UP – Inda’bank is actually a family name passed down for generations.

One thought on “QUIZ: College Football Recruit or Made Up Name?”