The other day we posted the above video of myself making a plea to Derrick Henry to feed us some sort of workout video. Now look, do I like it when I see gym selfies or people posting their own fitness videos? Hell no. But Derrick is different. Seeing Derrick throw up more plates than Andy Reid at a buffet gets me more hyped than any hype video could. Plus, as The #1 Derrick Henry Fan Site On The Internet™, we’ve been jonesing for some content. ANY content. Because aside from a Milk commercial and a few autograph signings, we’ve gotten zilch. A far fall from last offseason when my man was dropping enough workout videos to make Tony Little blush.

This (albeit very odd) request could’ve gone one of three ways. He could’ve been very creeped out by and blocked us on Instagram like he was Randy Johnson or something, he could’ve never have seen it, he could’ve seen it and just not done anything about it, or he could do what he did and feed us lowlifes with pictures and videos of him sweating in a gym.

But then last night he posted these to his Instagram stories…

Could it be sheer coincidence? Sure. Are we going to assume it was? Not at all. We’re owning this. We’re adding it to our resume. We’re waving this flag high and then planting at our headquarters. We asked Derrick Henry – the greatest running back in the entire NFL – for some workout vids, and within a day, he obliged. 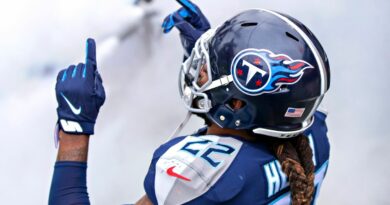 An Open Letter To Derrick Henry