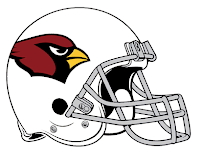 #31 Arizona Cardinals
I think it’s safe to say that everyone in America – minus the Sixburgh faithful – were rooting for the birds from the west earlier this month. The air corps was unleashed in the playoffs and Larry Fitzgerald showed that he is the real deal. We all are aware that The Cardinals can launch the rock. However, if you take a look at their running stats (76 YPG, 32nd in the league and only 14 rush TDs in the regular season), you’ll see that there is a serious need for re-evaluation.

Let’s take a look at the top running backs who will be available at the end of the first round:

Semifinalist for Maxwell Award and Doak Walker Award
Eclipsed Larry Fitzgerald for the most TD’s as a Freshman and Sophomore
Notched back to back 1,000 yard seasons
Very consistent 4.8 YPC over his two year stay in Pittsburgh
Waltz in the endzone 35 times on the ground in those 2 years
Projected to run in the 4.4 area

Mccoy is a great fit for the Cardinals. You’ll see him plugged in much like Chris Johnson was plugged into the Titans system this past year. His speed and consistency will allow him to be a first round pick.

I’m going out on a limb here and predicting that Greene will have a great combine and impress the Cardinals and remind them a lot of Edgerrin James and his great pass protection skills. His big frame will help him block for the Cardinals air attack. One question is was he a one hit wonder at Iowa (He only started one year)?

Also be aware for a drop in Knowshon Moreno (Depending on his combine) or the rise of Texas A&M’s Mike Goodson.