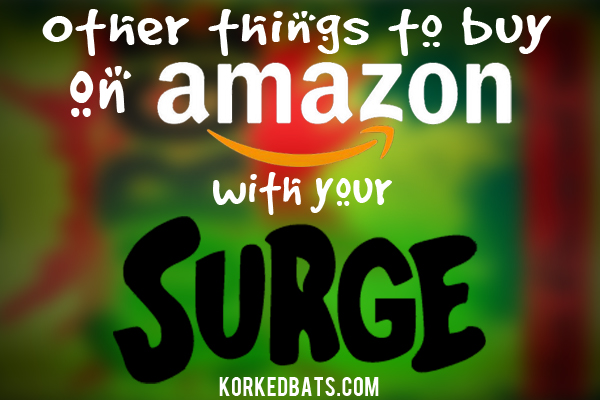 I’m not sure what SURGE was made of, but it was delicious. Plus, while drinking it, you felt kind of rebellious, knowing that you were consuming more sugar than a mixtape full of The Archies, Baby Bash, and Trick Daddy. In fact, in the hit movie Teenage Mutant Ninja Turtles II: The Secret of the Ooze, the secret of the ooze was that it was actually SURGE. Unfortunately, playing in a puddle of it to try and become a ninja only works for turtles, apparently. Trust me, I tried.

However, like all good things, the return of SURGE comes with a catch. It is only avaiable on Amazon. That’s right, the same place you go to buy books to read by a fire on a cozy and quiet Sunday afternoon is now the same place you go to buy the soda that gets you amped up enough to shoot a nail gun in your forehead while listening to Gwar on your boom box at the highest volume, because SURGE!

Obviously, when you’re on Amazon, you know you can’t just buy one thing. Amazon knows you. In fact, Amazon might know you better than you know yourself. العاب مراهنات “I see you’re purchasing gardening gloves, you might also like… ice cream.” WHAT?! How did Amazon know that? Yes, I WOULD like ice cream! And there it is… TWO purchases on Amazon.

So when you add a case of SURGE (which sold out in a few hours, but is already back in stock), Amazon might suggest some other things that a fan of popular 90’s  caffeinated sodas might also enjoy.

So here are  a few other things you might want to consider adding to your cart:

Remember when McDonald’s tried to unveil burgers with an adult taste? What did that even mean? That was McClassic. Also, McWhatWereTheyThinking?

When pizza’s on a bagel, you can eat pizza anytime. No seriously, you’ll be able to eat pizza at ANY TIME, because after downing a can of SURGE, you won’t be able to sleep.

It goes against the Surgeon General’s Warning to drink SURGE WITHOUT playing video games. So to bring back the nostalgia of SURGE, you’ll need to play Firefox or something on your Nintendo 64. But to get the full in-game experience, you need a Rumble Pack. “The controller shakes when something blows up? This. Is. The Future. Of. Gaming.” Plus, you’re going to be shaking after drinking SURGE anyway, might as well shake with a Rumble Pack.

The Offspring’s Americana album on CD

It’s like Pavlov’s Dog, whenever you hear “Pretty Fly [For A White Guy]”, you gotta chug a SURGE.

The point of a Tamagotchi was to learn responsibility by trying to keep it alive, by feeding it, cleaning up after it, and never, under any circumstances, feed it SURGE.

Zenon: Girl of the 21st Century on VHS

Coca-Cola’s rerelease of SURGE features 16oz. cans, instead of 12oz. cans, so you’re going to need really big jeans with really big pockets to carry your extra cans of SURGE around. Plus, now, your mom isn’t around to not let you buy them because “you’d look like a skater!”

Because when you’re already drinking enough sugar to send Willy Wonka into a coma, what’s another few grams of sugar with cookies and frosting?

Of course, if you’re going to get a Nokia cell phone, you need to get a customized face plate on it. But you don’t need to get that on Amazon, you can get that at any of those kiosks at the mall.

Or as SURGE drinkers call them, “in-line skates.”

Because you need something to cover your “in-line skates.”