The Syracuse Orange in bound the ball the length of the court. The ball is tipped, starting the clock. Cuse’s Eric Devendorf grabs the ball and in one motion just throws the ball up from just behind the arc.

If this were a movie, this scene would have been completely in slow motion.

They would cut to a shot of Jim Boeheim, then Jim Calhoun, then back to the ball floating in the air, then to Eric Devendorf with his follow through hand still in the air, then Hasheem Thabeet, then to the commentators, back to Boheim, ball, Calhoun, ball, Devendorf, the hot dog vendor, ball, people huddled around their TV at home, commentators again, and finally the ball going through the hoop touching nothing but the nylon net.

That is about how long that final shot seemed.

The Syracuse team rushes the court in excitement.

So Syracuse upsets UConn on a last second buzzer beater.

The referees huddled over their TV monitor and rewatched it over and over to make sure they got this call right. The replay was close. I mean really close. We’re talking Phelps 7th gold medal race close. The ball was on the tips of his fingers when the clock struck triple zeroes.

A few minutes later, the referees’ announcement was made.

We were set to go into overtime. Little did we know what we were getting ourselves into.

Had Devendorf’s shot counted, the game still would have had a great finish.

But instead we got a finish that was Heath Ledger in “The Dark Knight” great. 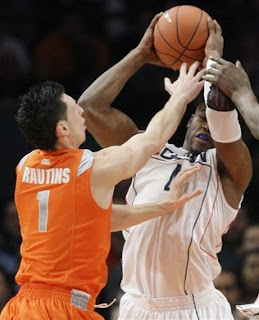 Before I go on to talk about this epic and legendary game, let me first talk about the Big East Tournament for a second. No doubt that the Big East is the best basketball conference this season. They have been dominant. Up until this week, some people figured that this conference could distribute 3 number one seeds for the Big Dance. They are good, there is no arguing it.

However, for having such a great conference how can they have such a dumb tournament logo? For those of you who haven’t seen it, it’s the same as last years. And yes, it was just as dumb last year. The event is held at Madison Square Garden in New York City. So, what’s the best thing that represents New York? Statue of Liberty? The Empire State Building? That restaurant from Seinfeld? Hmmmm… I know! How about a TAXI! No wait… a Taxi that is family friendly. One that looks like it came straight from the movie “Cars”. Are you serious? That is like using a picture of a an L Train for Chicago, an old retired guy for Miami, or Danny Tanner for San Francisco. All of those things do have something to do with the city, but have no place on a logo for a basketball tournament. I mean who is designing the Big East logo? Richard Scarry?

Thank you for allowing me to vent… We can move on.

• • •
Now, back to the game that was more dramatic than an episode of The O.C.

For the first 5 overtimes, UConn seemed like they were the older brother and their younger annoying brother just wouldn’t leave them alone.

They would pull ahead by four or six a couple different times, and Syracuse would come back by hitting every BIG shot they took (Not to mention shooting nearly 80% from the free thrown line). It was like they took shooting lessons from Lee Harvey Oswald.

The tension rose so high during the game that every shot seemed to be life or death. When UConn pulled ahead by four points it seemed like it was ten or twelve, but sure enough Syracuse fought back every time.

Eight players (four on each team) fouled out over the course of the game. In the 5th overtime, Syracuse had no other option but to insert their secret weapon, walk-on Justin Thomas, into the game. Thomas has 4 points on the year appearing in the end of 10 games this season. He had only played 21 minutes up until last night’s marathon. 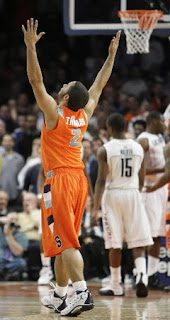 Last night, he got a whopping 7 minutes of playing time. Not to mention recording his first rebound of the year.

Luckily for ‘Cuse, no one else fouled out. Because the only other guy left on the depth chart was this guy.

Props to SU’s Jonny Flynn for playing 67 minutes out of the 70 minute game. He was one of six players who recorded a double-double.

The game was a non-stop thrill ride. Each overtime brought more and more excitement.

The second overtime almost closed the game with a miraculous midcourt shot by Conneticut’s Kemba Walker. Unfortunately for the Huskies, it had an ounce too much on it and hit the back of the rim.

Syracuse was down six for most of the third overtime. They managed to get the score to 95-98 inside the final minute. With 11 seconds left, Andy Rautins tied the game up with his three pointer on a nice open look off a screen.

The closing seconds of the fourth overtime had a bunch of good looks at the bucket leaving fans to believe that they better grab their coats and belongings. The only thing that amounted was missed layups and blocked shots and a five more minutes to play in overtime number five.

In the firth overtime, UConn had a look at an NBA range three pointer that fell short. They got the rebound, missed the put back and then missed a jumper as time expired.

Everyone in unison put their hands on their head and sighed, “AHHHHHHH!”

By this point the players and fans were more exhausted then Jon and Kate when they had to take the kids on Oprah. 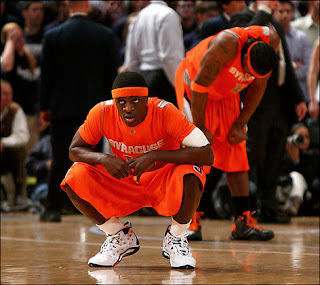 I tuned into the game for the final play of regulation. I then continued to watch for two more hours until the game ended. As each overtime came and went, I got to thinking of another multiple overtime game that I was at. In 2003, I was at Commonwealth Stadium when Kentucky fell to Matt Jones’ Arkansas team in 7 overtimes (tied the NCAA Football record). On a less famous note, my sophomore year of high school, I commentated a basketball game for my schook’s public access channel that featured my high school and my high school’s rival high school. That game went into 4 overtimes. And yes, I was out past curfew because of it. Sorry, mom.

Back to the Johnny Chase of basketball games.

By the 6th overtime, some people were getting tired. They wanted the game to end because it seemed less like a college basketball game and more like this.

I found myself not wanting to see this game end. I needed more overtimes! Like a horrible at spelling drug addict, I wanted to keep OTing. It was like a good war movie. You see guys dropping left and right, but yet you don’t want to see it stop. But like Nelly Furtado says, all good things come to an end. 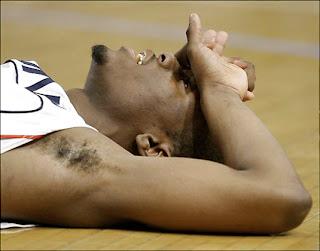 Boheim said following the game, “It would have been a lot better if they just counted Eric’s shot and we could have gone home 2 hours ago.”

Yeah right, Jim! Your game gave us exactly what we needed: