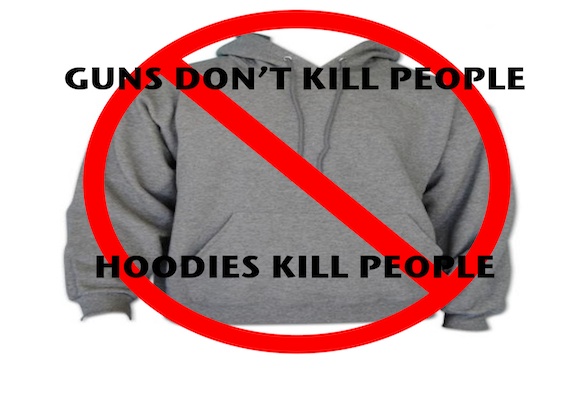 The NCAA has recently decided to ban the use of hoodies amongst minority student athletes on all college campuses that border communities with neighborhood watch programs.

While admitting that this will result in a major loss of income generated by selling the popular form of sweatshirt, they feel that it is in the best interest of the students to pull them off the racks.

In an official statement, one NCAA representative said, “Oh, it’s definitely about race, but what can we say…? The thing about America is, people are super racist, and they’re allowed to carry guns.”

The national ban has sparked outrage and protests on college campuses all across the country, with minority students feeling particularly discriminated against.

While national polls that we just made up show most of the country as anti hoodie-ban, states in the Midwest and South show the highest approval ratings.

While the irony is clearly in the fact that hooded white men used to be the scariest thing on earth, it’s obvious that the tables have turned.

This has some former and current members of a certain elitist boys club quite upset: “Hoods were our thing, dammit! Now the blacks and the Jews took that away from us too! We can’t all have scary hoods! What kind of world would that be?!” said Karl Dipspit of the Beta chapter in Jackson, Mississippi.

Clearly, the hood controversy is far from over. Hopefully though, the media will continue to administer partisan debate with useless expert opinions weighing in only to foster irreconcilable points of view on an issue that’s simple in nature.

Until the smoke clears, this reporter will leave his hoodies in the closet, and next time I stop to get some candy, I’m staying away from the Skittles.