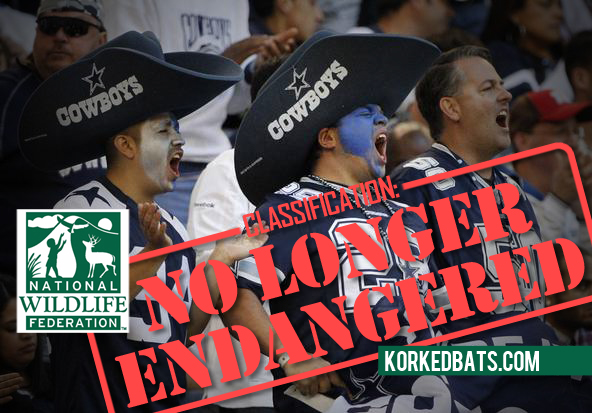 WASHINGTON, D.C. — The National Wildlife Federation recently announced that Cowboys fans are no longer on the endangered species list. Recent studies show they have just been hibernating since 1995.

Cowboys fans were best known for roaming the country annually in the early and mid-1990’s. Many wildlife experts believed the species died off over the past 19 years. However, new reports claim the species isn’t endangered and is making a strong comeback.

“We’re thrilled for this announcement,” NWF President and CEO Collin O’Mara said. “We are excited to once again hear the Cowboys fan’s distinct mating call back in its natural habitat, which, for those who don’t know, is defending Tony Romo in a sports bar or message board.”

Historically, Cowboys fans would come out in September and the early part of October, but would quickly revert back to hibernating in November and December, and are usually nowhere to be found by January. However, if the NFL season holds up like it is (which isn’t likely according to most NFL experts, and that one Giants fan in your fantasy league), NWF environmentalists believe Cowboys fans could come out and never leave. مراهنات اون لاين

“They’re like cicadas,” Doug Sable, a long-time Eagles fan, said. “They come out once every 7 years or so, and when they’re out, they’re so annoying.” Some Biblical Scholars claim the release of Cowboys Fans was the eighth (and often forgotten) Plague of Egypt. لعب قمار

Cowboys fans join an exclusive list of species that were at one time endangered, but are no longer. Other species on that list are bald eagles, manatees, and Cleveland Cavaliers fans. موقع ويليام هيل