This past weekend I went to the first baseball game I had been to since Ken Griffey Jr. and Alex Rodriguez played for the same team. You know, the same team that had Randy Johnson still throwing fast balls with his sweet mullet. 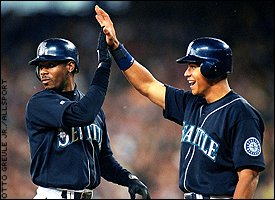 This was all before the King Dome was a faint memory to the city of Seattle and before I had fully grown into my front teeth.  Needless to say, it was time for me to go to another baseball game.  I have lived in Nashville for almost five years now and this was the first time that I have ever thought about going to a Nashville Sounds game.  I had never even heard of the Sounds.  They sure never played the Mariners.

So I found out that the Nashville Sounds aren’t exactly the Big Leagues.  They are like the “B” team, or the understudy, or the less attractive sister.  They are the close but no cigar team.  Sorry, guys.

The game was okay. We won at the last minute. I ate a personal pan pizza and ice cream out of a little plastic baseball helmet.  The people around me were glad that I brought my harmonica and the fireworks which were set to Michael Jackson music was the cherry on top of this magical night.

I am so glad to know that Nashville not only has a football team that may or may not play in the fall and a hockey team with great potential and the inability to close the deal, but now I am fully ready to commit to Nashville’s very own almost famous baseball team.

Let’s do it again, Nashville.

Ladies (and gentlemen), want more of The Ladies Room? Be sure to keep up with Erin and her take on sports on Twitter by following @LadiesRoomKB