I suppose you could say this is a selfish post, but let’s be fair, everything anyone does is selfish.

Recently, ESPN (Entertainment and Sports Programming Network) had fans of each NFL team vote for the defining moment in that team’s history. A great idea, but difficult for some teams and a harsh realization for others (see: Bills defining moment being the Scott Norwood missed field goal in Super Bowl XXV). My favorite NFL team, the Kansas City Chiefs, defining moment was winning Super Bowl IV over Minnesota. Hard to argue against winning the team’s lone Super Bowl, but that day has nearly no impact on my life. I was almost negative twenty years old. I want to take a look at my favorite teams and the defining moment in their history during MY history (aka lifetime).

Kansas City Chiefs – While the Chiefs defining moment as a franchise was Super Bowl IV, within my lifetime it may prove to be the hiring of Scott Pioli as GM in 2009. One could argue either drafting Derrick Thomas or Tony Gonzalez (the two best drafted Chiefs of my lifetime) could be up there, but Pioli’s immediate impact cannot be denied. So I’ll go with that, looking to the future.

Kansas City Royals – I wasn’t alive in 1985. I wasn’t alive for Pine Tar. This one is quite depressing. I want to say Bo Jackson throwing out Harold Reynolds in the most ridiculous throw ever (I was almost 1 when this happened, and cannot find video anywhere). Or maybe the future of our farm system? Eh, that’s too much like the previous (Chiefs) choice, so no. I’m going to reluctantly say Greinke’s Cy Young. I know he doesn’t even play for my team anymore. I know he disappointed the year after, but it did a) bring national attention to my team b) make me smile a lot c) bring in good players in exchange for Greinke’s cracked ribs. 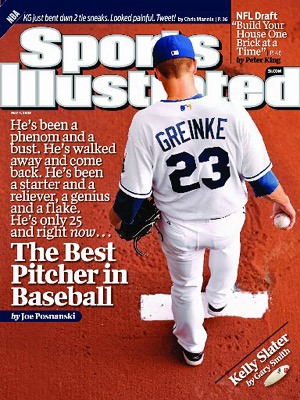 The rest of my sports allegiances come from various sources. I follow the Lakers closers than any other NBA team because I LOVED Kobe growing up. I had a Kobe lunch box. Kobe thermos, everything. I even dream of meeting a woman in Colorado (too much?). I have little NHL allegiance. I liked the Pittsburg Penguins because I thought they were relocating to Kansas City, and now I hate them because 1) They didn’t and 2) Sidney Crosby is a horrible human being and enjoys crying. I follow Manchester United because of Wayne Rooney (awkward parallels between he and Kobe in their personal life). But I am not a big enough fan of any of these teams to really dictate their most defining moments. The Lakers have had plenty. The Penguins is obvious (but I hate them) and Manchester United’s may be acquiring and then unacquiring Cristiano Ronaldo.

What is the defining moment for your team? What do you remember about your team in your lifetime? Patriots and Broncos fans need not apply. It’s pretty obvious.