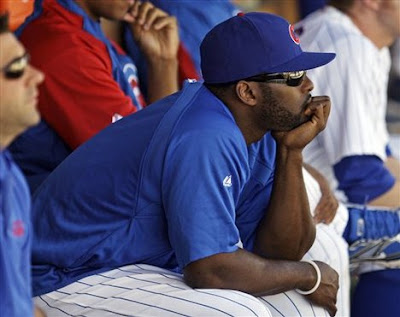 Milton Bradley is suspended the rest of the season.
So what else is new?

That’s like saying Pacman was found in another strip club, Tim Tebow has gone on another mission trip, or Mark May had to wipe off his glasses after getting in a heated debate with Lou Holtz.

Some things just don’t need reported.
What did he get suspended for THIS time?

Well… He DIDN’T get suspended for dumping a bag of balls onto the field of play, tearing an ACL while confronting an umpire, throwing a bottle at a fan, rampaging through the press box in search of a commentator who said some “unfair” things about him, or throwing the game ball into the stands with only two outs.

Milton was suspended by general manager Jim Hendry for “issues he could no longer tolerate.”

These issues being negative comments that Bradley made about the Chicago Cubs organization.

Basically, comments that every player who has ever played for the Cubbies has wanted to say but hasn’t because they didn’t want to be suspended and/or hated by those harsh Chi-town fans.

“You understand why they haven’t won in 100 years here.”

Wow. True. But wow. He actually said it. He said what everyone has been thinking. I mean any team who finds things outside of baseball for reasons of why they haven’t won the World Series in 101+ years definitely has some negativity swirling around their organization.

Let’s blame Bartman! He acted the way any other fan in the seats would have by reaching for a foul ball to take home as a souvenir, but since he interfered with Moises Alou who probably wouldn’t have made the catch anyway, we will blame it on him!

We won’t blame it on the Cubs and the 8 runs the Cubs gave up that inning. Not the fact that Alex Gonzalez had an error on a potential inning ending double play ball. And we won’t even consider blaming the fact that the Cubs had an entire Game 7 to win and make it to the World Series. (That’s one thing Cubs fans and Cardinals fans have in common… They fail to have an argument as to why they lost that 7th game. Apparently the whole series rested on the final outs, plural, of their respective Game 6’s of the series.) But yeah, let’s blame it on Bartman.

Or that stupid goat. 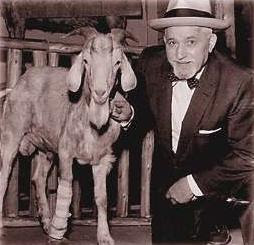 However, Milton Bradley, you are being thanked from all over Cub nation by guys like:

Luis Salazar
Mike Harkey
Dwight Smith
Scott Sanderson
Ryne Sandberg
Mark Grace
Chet “The Rocket” Stedman
and thousands of others who were cursed to play with that franchise for so long.
But good move, Cubs. Bradley was only hitting .257 with 12 homers and 40 RBIs. An absolute dismal season. 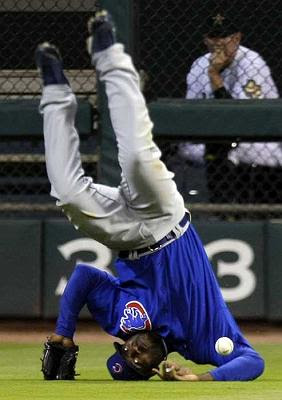 Although Milton Bradley should have been suspended a long time ago for inventing the game Trivial Pursuit. That game makes me feel so stupid. More stupid than the time I locked my keys out of the car.
Cubs fans had to learn the hard way that having Milton Bradley on your team is a lot like having Barack Obama in office.
You like the idea of it more than you actually like it.