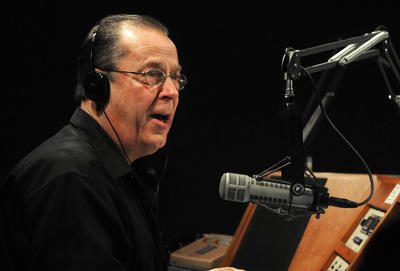 CHARLOTTE – Now that the three of the nation’s top four professional sports leagues are officially in their respective off-seasons, local sports talk radio show hosts are forced to use segment topics other than, “Call in to react to our recycled sports topic.” Some hosts are even considering new alternatives.

Gary Paulsen, host of the Charlotte-based afternoon drive radio show Paulie And Pete, is considering talking about topics other than sports.

“Every summer, we’re forced to get creative. On a normal summer afternoon, we would get [Charlotte-Observer sports columnist] Scott Fowler in studio for two hours to break down UNC-Charlotte’s really busy kids’ summer sports camp schedules,” Paulsen said. “But this year, we’re thinking of talking about new pop culture type things. Like movies and Lady Gaga and stuff.”

However, Paulsen was sure to note that sports talk radio hosts must be careful venturing outside of the world of sports topics.

“I’ve been in this business for over 20 years, so trust me when I say this. There is a fine line between pop culture and sports. Sports fans tune into sports talk radio to hear sports talk, and strictly sports talk.” Paulsen added. “Well, that and updates on the current time every quarter-hour as well as what the weather looks like outside our studio window.”

When asked if he was worried he wouldn’t understand what’s currently going on in the world of pop culture, Paulsen said, “That’s phooey. I write a blog and own two Crowded House cassette tapes. I think I’ll be fine.”