Skip to content
MLB
April 9, 2009 Jared
As you might remember, my last plea for an outside source to intervene and help out one of my sports teams went unrecognized and unfulfilled.
Undaunted, I’ll make no hesitation in asking someone else try to help me this time for a different team.
As you may know, I’m a Royals fan- (indiscernible background noise)- um, and I have been for- (hysterical laughter)- Excuse me.
Hey you! Yeah! I’m talking to you in the Boston shirt laughing at me from the back! Yeah you… No, the other tool in the back wearing a shirt that says “The Green Mon-stah.” Of course you! Sit down and shut the hell up. You’ve been a Red Sox fan since 2004. You think it’s funny I’m a Royals fan? Go trade away the best right-handed hitter in the game again! Jackass.
Ok, sorry. Where was I? Oh yeah! Me being a Royals lifer. So you might or might not be aware of this, but the Royals play their home opener tomorrow night against the Yankees. It will be the first game at the newly renovated Kauffman Stadium, on a day that we celebrate 40 years of Royals baseball in KC and our first legitimate .500 team in over half a decade.
What you may not yet been informed of, however, is which Royal was hand-picked by head coach Trey Hillman to be the starting pitcher for this historical day. Allow me to kill any suspense by telling you that it’s Sidney Ponson.
Yes, that Sidney Ponson.
He of the 5.04 ERA in 2008. And 6.93 in 2007. And 6.25 in 2006. 6.22 in 2005. 5.30 in 2004.
Aaaand, he of the 5.36 ton club since somewhere around 1976.
Ahem. Yes, him.
Now I don’t want you to get the wrong idea. The point of this post isn’t to bash on GM Dayton Moore and Manager Trey Hillman for assigning the 4th spot in the rotation to Sidney Ponson. I started to write that post three times, each starting with varying versions of the following sentence: [expletive] [expletive] mother [expletive] pieces of [expletive] bottom-feeding [expletive]! Needless to say, I deemed it a lost cause, cut my losses, and moved to a new scheme.
As you remember from my signal for Tim Donaghy, I have a giant spotlight that’s kind of like the bat signal. I just bought a new template-thingy for it. This one is of a rather classy looking gentleman carrying a staff and rocking a top-hat, schnazzy red bow-tie and carry-out bag. Looks a little something like this: 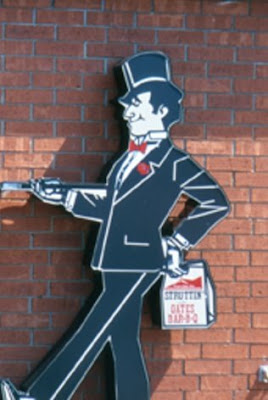 That’s right. I’m calling you out, Gates Bar-B-Q.
I don’t want this Chunk wannabee pitching on Opening Day at the New K. If you really love KC, you don’t either.
To accomplish that end, allow me to propose a plan: offer all you can eat ribs, burnt ends, smoked ham, fries, cole slaw, baked beans and potato salad from 3-5 PM tomorrow night for $5.
Are you going to lose some money? It’s a mathematical certainty.
Will Ponson be in your place at game time, napkin tucked into his Under Armour not-muscle top, stuffing down ribs two at a time, bone and all- instead of ruining opening day for 45,000 strong?
I dunno.
Does the sun rise in the east and set in the west? Are puppies cute? Do I love Cracker Barrel Farm-Raised Spicy Grilled Catfish with extra spice, lemon, and Louisiana Gold Hot Sauce? Is it must-see TV every time Mickey Rourke does an interview? Did Fast and Furious make $71 mil in its first weekend? Do I have a man-crush on Mike Rowe? Is Tracy Morgan the single-most entertaining person on the planet? Is Ghost one of the most funniest films of all time? Should children speak at the dinner table? Is Kate Beckinsale smokin’ hot? Did my girlfriend rant about Kate Beckinsale for seven minutes after she read a draft of this post? Are these kicks fresh as hell? Do I cry every time I watch Titanic? Would you watch a series that featured LC and Kristen living in an apartment together back in Laguna?
You tell me.
I don’t have much to offer you, Gates. I’m only a man. I’m only a man on a blog. I’m only a man on a blog that loves KC. My love is all I have to give. But I’m also a man with a dream. And that dream is to not watch Trey Hillman throw Sidney Ponson’s carcass out to pitch 3 unimpressive innings to the New York Yankees on Opening Day at the New K. That’s where you come in, Gates Bar-B-Q.
You’re a Kansas City staple. You have the goods that this fella just might enjoy.
Let’s build something together.