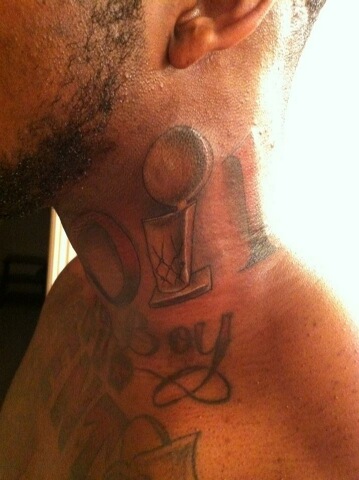 I’m going to assume you don’t know who he is either. He’s a rookie on the Mavericks. Still not ring a bell? That’s because he didn’t play one minute in the entire NBA Playoffs. In fact, he averaged just 2.3 points in the 18 games he saw action in all season. And he hasn’t seen the court since February 2nd. Despite all that, he decided to get a hideous  (I tend to use that word to describe every tattoo) rendition of the championship trophy, on his neck of all places. What’s next? Are trainers going to start tatting-up when their team wins a championship. One could argue they had just as much, if not more, to do with the championship than Dominique Jones did. Congratulations on making yourself look like a fool for the rest of your life.

(I’d still trade places with you.) Jack McKeon is a bit too old to manage an MLB team.

When the Marlins decided to hire 80 year old Jack McKeon as the club’s manager recently, it was just a matter of time before he had the first of many senile-old-man-moments. It didn’t take long.

First, he benched star shortstop Hanley Ramirez. I must say Ramirez is probably the only Marlins player that I can name off the top of my head. However, he was slumping so maybe McKeon just wanted to light a fire in the young man.

Then, he pulled reliever Randy Choate…IN THE MIDDLE OF AN AT BAT (with the count at 2-1). Who does that?

“McKeon asked me what I had going on tonite. Told him I was going home 2 play w/ Twitter. He replied “oh, what kind of dog is it?”

Of all the dumb things I’ve seen Les Miles say/do, this is one of them.

How this man continues to recruit top talent and win games is beyond me. What could possibly be the reason for making this video?

No, not because he will forever be known as the kid with the hot softball playing mom, but because she decided to name him…get ready…

Gah, just when we thought we found the world’s first normal, good looking, feminine softball player, she has to go off and name her baby Diesel Dean Daigle.

Still waiting on the WNBA version of Jennie Finch… 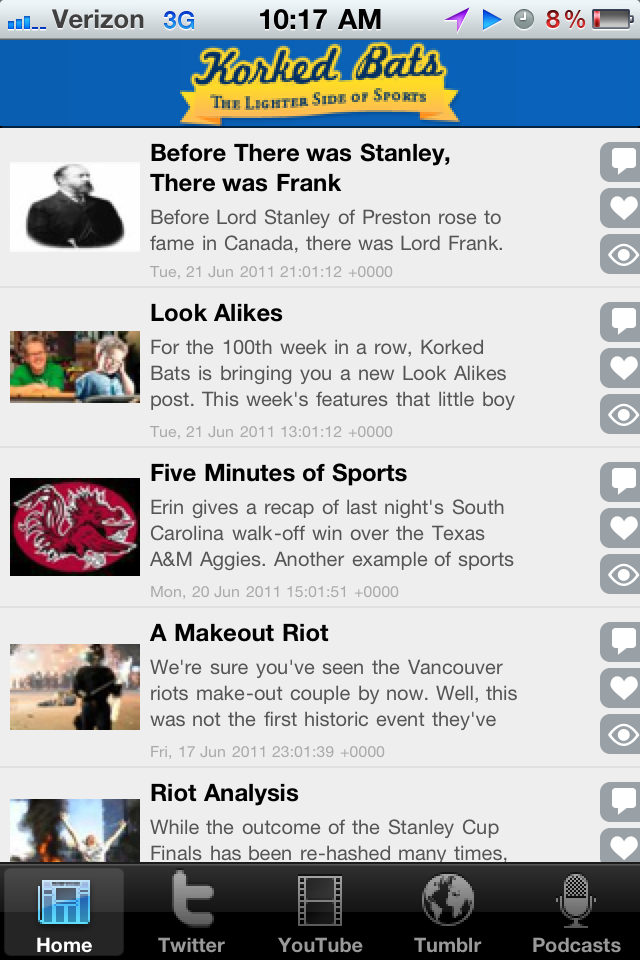 The moment you have been waiting all your lives for is almost here.

That’s no Photoshop magic folks. That’s an actual screen shot of my phone running a test build of the soon to be released to the Apple iTunes App Store, Korked Bats iPhone App. As you can see, this app will make it easier than ever to access all Korked Bats content in one place. All of our posts, tweets, YouTube videos, Tumblr stuff (I didn’t even know what Tumblr was until yesterday, but apparently we have a Tumblr site where we post behind the scenes stuff, photos and pictures that never make it to the site, and other random stuff you won’t get here on the website), and podcasts will be easily accessible to those of you cool enough to own an iPhone.

I’m not sure when the app will be available for download, as this entire process has been somewhat complex and hurts my brain. But we’re close! What more could you ask for from a blog who’s only source of revenue is the $0.10 a day we make off of the ads to your right?