Ever since The Worm took the NBA by storm with his obnoxiously awesome hair-dos, I thought we’d never see the day where a player could outshine Dennis. Well, that day has come. Memphis Grizzlies guard Tony Allen has shaved his team’s logo into the back of his head.

My only issue with this is the glitter as the eyes. Why glitter? Other than that, this barber has done a remarkable job on this. I hope other NBA players take this as a challenge and one player from every team gets their team’s logo shaved into their skull. The Trail Blazers would be the coolest in my opinion.

What a lame prize.

A fan at the Lakers Hornets game last week won a year’s supply of 7 Up. Pretty cool, right? They probably were sitting in the lucky seat, answered a trivia question correctly, or their business card was picked in the quarterly raffle. Right?

Nope. They actually made a layup, free throw, three pointer, and half court shot all in a row at halftime.

To put this in perspective, according to CNBC’s report “This year alone, those who have hit a half court shot at NBA games have won $10,000 (Mavericks) and $20,000 (Thunder), while two Kings fans won Kia cars and a TrailBlazers fan won a Toyota truck. In fact, last year, when the Lakers played the Oklahoma City Thunder in round 1 of the playoffs, a fan hit a halfcourt shot to win $235,000.”

If you remember, I checked in on how ole Lenny was doing back in October when we named Dykstra the Korked Bats Random Athlete of the Month. In that article, I talked about his troubles with the law and his bankruptcy that forced him to move out of his $17 million estate home and start living out of his car. A lot of other things happened in his life that I wont write here because I already wrote about it. So click that link if you want to read more.

Anyway, Lenny seems to be doing better now, right? I mean anyone who walks around outside of governmental buildings wearing a suit and chewing on Twizzlers must have their ducks in a row (thanks to Erin for helping me remember that saying). Well, not so much.

According to this report by TMZ, Dykstra recently posted an ad in Craigslist for a housekeeper (I guess he finally moved out of that 2006 Kia Rondo). When a woman responded to the listing and showed up at Dykstra’s house, Lenny informed the woman she would be doing more than just cleaning his house. She would also be massaging his naked body. Understandably, she left the home immediately.

No word on whether or not Lenny pulled out the Costco 20 lb. plastic box of individually wrapped Twizzlers in an attempt to seduce the woman. 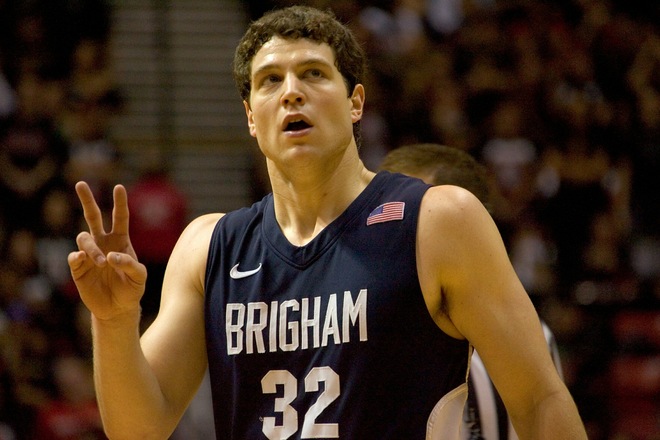 This is not a good idea.

According to News 4 in Salt Lake City, Jimmer Fredette may be on his way to starring in his own reality TV show. That’s right, a camera crew is going to capture Jimmer’s life as he transitions from a college basketball player to a NBA draftee who has to sit around and wait for the lockout to end.

Don’t get me wrong, I like Jimmer and think he’s a model citizen. But if we’ve learned anything about reality TV, it’s that the wilder and the crazier the subject matter is, the more entertaining the show. Following a guy who’s honor code considers coffee and tea drinking beyond the realm of acceptable behavior isn’t exactly earth-shattering television.

This is what a quadriplegic man looks like when he rushes a field.

Just in case you were wondering. It’s not quite as exciting as a man on foot.