Skip to content
Let Me Be Frank With You
February 2, 2011 Frank

I don’t really have much to say about this, but it at least needs to be noted. After all, Korked Bats is where pretty much everyone goes to get their up to the minute breaking news in the sports world, right? Well, for all you Alabama, Florida, Ohio State, Texas, LSU, etc. fans, I hope you enjoy your monopoly over 4 and 5 star players. As for me, I’ll be slowly slipping into a state of depression as I realize top recruits don’t want to play football at Kentucky. What? Is that 1951 National Championship that was awarded years after it actually happened not enough to tip the scales for you? No? Crap.

Welp, it’s pretty clear where Alabama stands in the “is cheerleading a sport” argument.

Recently the University of Alabama cheerleading squad pulled a monumental upset in taking down 18 time national champion Kentucky for their first title since 1984. In their first practice following the victory, head coach David McDowell informed the team they would not be receiving championship rings from the university.

“We definitely expected rings,” said Josh Olson, a squad member. “Kentucky has won 18 times and they have 18 rings to show for them, that the school gave them.”

What’s even worse? The squad members decided to purchase rings on their own but were told they may not use the Alabama logo in the design because it is trademarked. Ouch.

What’s even worse than that? Alabama STILL has yet to send out any news released acknowledging the national championship.

What’s even worse than all that? This isn’t even the first time I’ve written about cheerleading. Sorry.

These guys have a lot in common.

Not only are they world class athletes who have won at the highest level time and time again, but they also enjoy womanizing at the highest degree! I have no idea when or where this picture is from, but may god have mercy on whoever they bought Jager Bombs for that night. I can’t imagine a more creepy image for decent looking women than the one above. It’s straight out of a horror film. Can’t you just see them walking up to a female, tapping her on the shoulder, and when she turns around there they are, silently smiling.

Tomorrow the 3rd of February, 2011 marks the 10th anniversary of the only opening day in XFL history. I have a vague memory of the league, but I’m pretty sure I was a pretty big fan although the idea of bigger hits never really materialized. As embarrassing as it may sound, Austin and I actually were in a fantasy XFL league. And even more embarrassing, I won. I had Tommy Maddox. 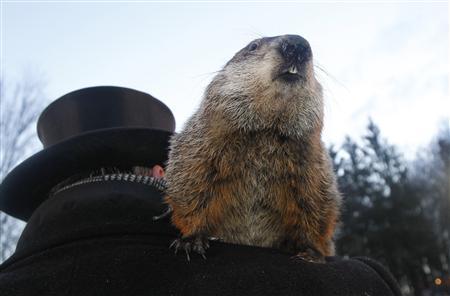 The Groundhog didn’t see his shadow.

Good, I hate coldness. And that’s a big groundhog, I think.