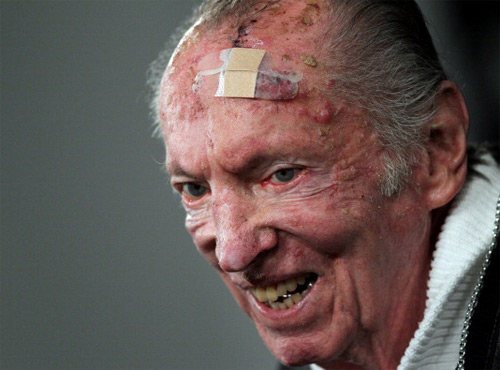 Al Davis doesn’t have to worry about a Halloween costume.

I hope you weren’t chowing down on your breakfast/lunch/dinner when you opened this page, because this is the single most hiddeous picture of Al Davis that has ever been taken (and that’s saying a lot). From the brownish-yellow tinted teeth, to the massive boils on his forehead, to the open festering wounds, there’s not much about this man that’s pleasing to the eyes. Actually there’s nothing. He looks just like this Monster Face toy I had growing up.

Good thing he got the transparent band-aids . I can hardly tell they’re there. This recent onslaught on Jay Cutler from just about every human being on the planet is one of the most puzzling things I’ve seen in a while. I can understand some people being upset and thinking he should have kept playing, but it seems just about everyone not on the Chicago Bears is ready to crucify this man. He sprained his MCL, tried to go back in the game, and couldn’t do it. What’s the huge deal here? Nobody can gauge Jay Cutler’s ability to perform with this injury but him.

Do people really think he didn’t want to help his team win a game that would have sent them to the Super Bowl? Look, I’ve never even liked Jay Cutler, but in this instance, all of this criticism is extremely unfair. He’s not a wuss. He played quarterback for Vanderbilt where he was beaten senseless by SEC defenders for 4 years. He gets sacked 57 times a game. And oh yea, he’s a type 1 diabetic which completely alters one’s life.

Leave him alone people. And if you don’t want him in Chicago, I’d be happy to see him under center for the Titans.

Apparently Kim Kardashian is more fun to watch than the Nets.

So Kim Kardashian attended a Nets game recently. The Nets are bad. Those around her found something else to focus their attention on. And they were caught. And now I’m showing them to you. Shame on you people.

We’ve got us a prankster on our hands.

In a move that would make Kenny Powers proud, a Louisville TV station mistakenly (I think) spelled New York “Jew York” during their broadcast. There are all kinds of jokes I could write here, but I’m afraid I may be crossing the line. So I have an idea, how about you guys comment on this in the comments section.

I want Bruno Mars to go away forever.

Is it just me or does this guy have about 38 songs out right now that seem to be playing on repeat on every single radio station in North America? My graciousness I’m so tired of his voice. I wish he actually would catch a grenade for me (and it detonate). And his name is Bruno Mars of all things. How awful.