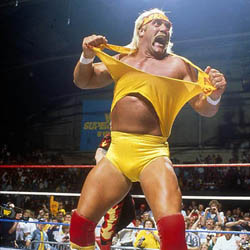 In news that I thought broke when I was still a small child, the career of Hulk Hogan is apparently over now. Mr. Hogan underwent a spinal fusion operation preventing him from being able to take anymore abuse.

I find it odd that seriously nobody cares about this. I bet you didn’t know. I guess you could consider him one of the best professional wrestlers of all time. But in a sport where scripts take the place of talent and strategy, that’s not saying much.

Move over Cleveland Show, get ready for The LeBrons.

In an attempt to outshine the ratings of “The Decision” and “The Cleveland Show” combined, LeBron James is slated to star in the upcoming web-based cartoon The LeBrons. James will channel his inner Eddie Murphy and voice most of the characters in the show which are based off his Nike commercials.

So it looks like we’ll have us a diva-like, thin-waisted, wide-hipped female LeBron, a confident young Asian girl LeBron, a pimp with a ‘fro LeBron, a LeBron grandpa with abnormally thin legs, a young ball playing LeBron who looks like my friend Julian, a LeBron LeBron, a little punk LeBron, and wait…

All in all it looks to be the best new show since the P.J.’s. 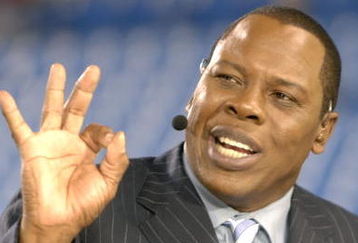 After the Jets upset the Patriots on Sunday, Jets linebacker Bart Scott screamed into the camera, “To all the nonbelievers, especially you Tom Jackson!” Scott was referring to Jackson’s pregame prediction of a 30-10 Patriots blowout. Well, this apparently scared the dog poop out of Tom leading him to eat his words in a very cowardly, non-beleivable way. Jackson claimed his prediction was made in order to light a fire under the Jets and inspire them to play hard. C’mon maaaaaan!

“I wanted to further fuel them in a little of a cement—cement them in that bunker mentality of ‘us against the world.’ And so, I accept Bart’s comments for what they were, but I hope that he understands that I actually am a fan of the Jets, and Rex Ryan, and that defense. I think that they were well served by the fact that, yes they were angry and they got a little angrier, and I think it served them well on the field. I certainly knew that they had a chance to win, and I thought that they certainly might win the game. But I knew that when they saw 30-10, that I think they would be reminded of what most people were feeling, and I knew that they needed to be a little bit angry going on the field.”

Please. That’s about as believable as Barry Bonds not taking steroids. Was that an out dated reference? And has Barry actually retired yet or is he going to pull a Hulk Hogan and announce his retirement when he’s approaching 60?

Laurence Maroney is the early favorite for worst hair of 2011.

Broncos’ running back Laurence Maroney was arrested late Monday night for having weed and guns and whatever the rest of the cliche athlete crimes involve. But who cares about all that? Get a load of that mug shot! He could have been arrested for that alone. The only way that hair-do is acceptable is if you have red hair and freckles like Pippi and Wendy.

I obviously do not condone violence against women, but this girl needs to be punched in the face, really hard.