Skip to content
Let Me Be Frank With You
November 10, 2010 Frank

Believe it or not, this is what you will see when Oregon takes the court in their brand new venue Matthew Knight Arena in early 2011. Named “Kilkenny Floor”, as in “Oh my god! They killed Kenny!“, this court features, as you can see, a bunch of random yellow and brown trees, a Stonehenge-looking symbol at half court, and of course the words “deep in the woods”.

Congratulations Boise State, you no longer hold claim to the most annoying playing surface in America.

As if creating a basketball court in honor of the amount of trees your state isn’t unworthy enough, there is a second meaning to the whole idea. Oregon’s 1939, yes 1939, national title team was nicknamed “Tall Firs”.

Timely recognition, let me tell you what.

Wait, is he serious?

Dolphins linebacker Channing Crowder is a freakin idiot. After apparently being spit on during last week’s game versus the Ravens, Channing had these scholarly words to say:

“But Le’Ron McClain spit in my face. He spit in my face. That’s some real [stuff]. So if you talk to him, tell him he’s a ho. And if he ever comes to Miami, he’s got to see me. Then they said something about they let [Dolphins linebacker] Karlos Dansby get away with a facemask the play before. Who the [potty word] cares? A guy just spit in my face! I don’t give a damn about Karlos pulling somebody’s facemask. Like they didn’t see Chad Henne get hit twice when he slid. Yeah, a little Stevie Wonder and Anne Frank.”

Understandably the media was baffled as to the meaning of that last sentence and asked for clarification.

Well Channing, Stevie Wonder is a blind musician. Hellen Keller was a deaf, blind, mute. And Anne Frank wrote a diary during the Holocaust.

Luckily for Cam Newton, Channing left Florida long before he was able to cheat off of him in History 101.

If you happened to be watching Saturday’s Alabama vs. LSU football match up, you may have seen LSU head coach Les Miles spotted on camera reaching for something small on the ground before placing it upon his palate for digestion. It’s those moments that DVR was made for. I rewatched that shot probably 5 times and came to the conclusion it was a sunflower seed that he dropped, and out of a nervous reaction, picked up and ate. I remember thinking, “seems kind of odd he would care so much about that one tiny seed that he felt the need to recover it from the ground”.

Well, the real story is much odder than that. When asked about the incident, Miles responded with this gem:

“I have a little tradition that humbles me as a man, that lets me know that I’m a part of the field and part of the game. You should have seen some games before this. I can tell you one thing: The grass in Tiger Stadium tastes best.”

Remind me, how does this guy win football games again?

I think you’re supposed to hide for a while if you’re wanted for murder.

That homie you see on the left shot and killed that bro on the right a couple weeks ago in a Manhattan Diner. Understandably, the suspect, Earle Barranco, fled and has been a wanted fugitive ever since. Well, in a decision roughly as bad as the hiring of Wade Phillips, Barranco decided to attend a Charlotte Bobcats game and was featured on the JumboTron wearing the same distinctive diamond money-bag necklace he wore the night of the murder.

Two women in the stands recognized the man and alerted police. He’s now been caught. So, I guess if there is a moral to the story, its don’t surround yourself with tens of thousands of people wearing money-bag bling when you don’t want to be seen. 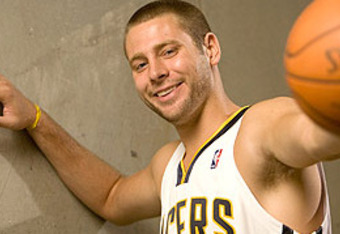 Last night the Indiana Pacers scored an unbelievable 54 points in the third quarter. Not only that, they had made all 20 shots they had attempted in the quarter with just under FOUR SECONDS to go! Enter Josh McRoberts. Arguably the most annoying looking, uncoordinated white boy Duke has ever seen, McRoberts decided to throw up a three pointer and immediately ruined everything.

Gah, I want to punch that guy in the face.