Obvious choice, I know, but this list would be severely invalidated if I left out this Cy Young Award winning pitcher. I can’t confirm this, but I’m pretty sure the Wicked Witch of the West had an illegitimate, pot-head child with Bert. This weed smoking, fragile looking, baby faced social outcast somehow turned out to be a pitching phenom. You may wonder how a woman who probably died in the 1960s and a puppet who was created long after her perishment could produce a child who is currently in his 20s, and a human. Well, crazier things have happened.

Its safe to say Adam Morrison idolizes his distant relative (once again, this fact was not checked) Jim. So much so, he decided to take this picture to go on the album cover of his debut album, I’m An Incredibly Gross Human And Nobody Likes Me Because I’m So Ugly. Seriously, there is nothing about that face that suggests he has ever picked up a basketball in his life.

Is that the Big Puma? Or is it a middle-aged dad shagging balls at his son’s baseball practice? Or wait a second, is that Vince Gill? No, I actually think it’s former Texas Tech Head Coach Mike Leach. Lance Berkman has defied all odds and proved to the entire world that yes, it is indeed possible to be fat, slow, walrusy, and uncoordinated and make millions of dollars playing professional sports. And that is why he is my favorite player. 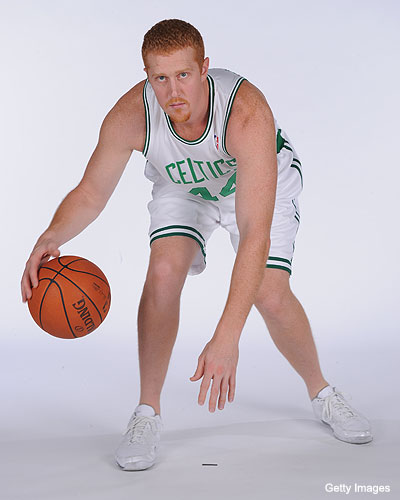 Do I really need to say anything? I like his left leg/ankle/shoe combo. I also like the deadly John-Wall-esque crossover he’s in the middle of pulling off. Oh yea, and he has red hair.

How is this guy still pitching? He’s almost 50, and looks it. Pretty sure his first strikeout came against Honus Wagner. I’m also pretty sure I sat next to this guy at the last Titans game I went to. Actually I’m positive. He was drunk and smelled like mothballs mixed with bologna.