Why did Derek Fisher cry after the game?

I’m just wondering. I’m not trying to judge criers, but it just completely confused me when he had to pause in the post game interview Tuesday night to regain his composure and apologized for being emotional. Hmm, excuse me, what? It was game 3. You have 4 rings. That was loco.

Maybe Golden Tate should have stayed in college.

So yesterday Golden Tate apologized for trespassing into a gourmet doughnut shop at 3 a.m. and resisting arrest. Nice. When asked about the situation, Golden said, “Freshly baked. I made the mistake of — a buddy made the mistake going in grabbing a couple. We ate them”. I like your style, Golden. If this whole football thing doesn’t work out for you, you could have a career writing “Let Me Be Golden With You…” articles for a non-profit sports blog. Wait, no you couldn’t. Anyway, keep doing you’re thing Golden. Never grow up.

Speaking of people not acting their age…

Charles Oakley should go back to college.

Yea, that’s him. That’s 46 year old former NBA star Charles Oakley looking like a buffoon in a Las Vegas hospital. Why? He got beat up by a couple security guards in a casino who successfully broke his arm and sprained his neck among other things (talk about a story to tell the grandchildren). At least he looks happy about it. It was probably a dumb idea to try an beat up a pair of casino bouncers. 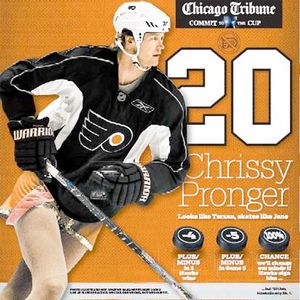 I am now a fan of the Chicago Tribune.

The above picture was inserted into Tuesday’s edition of the Chicago Tribune with the headline: “Chrissy Pronger. Looks like Tarzan, skates like Jane.” I don’t know anything about hockey. So of course I have no idea who this guy is other than his name is Chris Pronger, and he plays for the Philadelphia Flyers, who are currently in the Stanley Cup Finals against the Chicago Blackhawks. Good detective work, I know. When asked numerous different ways about the poster-insert, Chris replied, “”Next question,” each time. Boooo. Get a sense of humor.

I don’t know what’s worse, losing by 40 points in your season opener, or facing the shame of being named “Ke$ha’s Animals” (the guy on the left is our captain and named our team without our consent). Actually losing by 40 is probably worse, but both should bring you equal joy and laughter at our expense. The above picture is a screen shot of a documentary we are filming about our season you will be sure to see here on Korked Bats after the conclusion of the likely LONG season we’ve just begun. Should be humorous, if not sad.