Skip to content
Let Me Be Frank With You Uncategorized
April 7, 2010 Frank

Donovan says, “Hey Matt Howard, this is how its done.”

First off, I want to apologize for the whole mustache obsession phase I’m going through right now. But we’ve all been through such “stages” in our lives where we become obsessed with odd things, right? Like when Beanie Babies were the most hip things since Pogs. You had better believe I had damn near every one of those things (including all the Teenie-Beanies from McDonalds) along with numerous magazines valuing my collectibles at prices I still kick myself over not taking advantage of. Or when yo-yos attempted a comeback in 1998. I’m pretty sure I was the only person keeping the little kiosk in the Cool Springs mall “Yo Mama” in business during their final weeks. I even go through word obsession stages. Currently, the word coming from my mouth with the most abundance is “loco” and has been for a few years now.

I’m not telling you all this to make apparent the reasons I have no friends. I’m just trying to justify my current mustache phase. Eventually I will grow up and mustaches wont fascinate me (please pray for me). But when, in one weekend, I am bombarded with Matt Howard and the new look Donovan, it’s tough to let it go. Good work Donovan. Matt Howard, I never want to lay eyes on you again.

Despite the fact I am still in full denial that THIS Duke team took advantage of the easiest bracket in the history of the tournament and won the whole dadgum thing, I figured I NEED to at least mention the National Championship game. After all, this is a sports blog and college basketball is the best sport. And by mentioning it I mean I am going to tell the future. In thirty years Austin Huff will be Coach K. Nothing you say can convince me otherwise. At that point, Austin will no longer be my friend. And no mention of Coach K would be complete without my favorite memory of the man.

This kid is awesome.

If this doesn’t get you hyped up, you need to check your pulse. Needless to say, the Red Sox won that game. 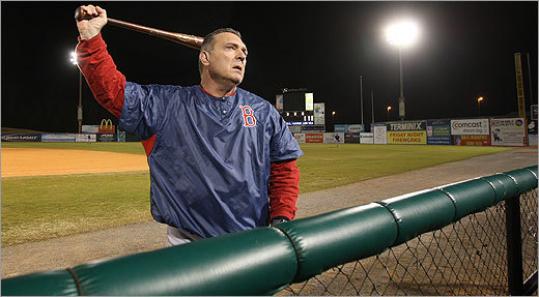 This man is awesome.

“I probably smoked two joints, drank about three or four beers, got to the ballpark, took some [amphetamines], took a pain pill, drank a cup of coffee, chewed some tobacco, had a cigarette, and got up to the plate and hit.” -Bernie Carbo

The above quote is not what makes this man awesome. In fact, many would say what you have just read is the opposite of awesome. But when you hear the rest of the story, you will see what I mean.

During the 1975 World Series, Bernie blasted the greatest pinch-hit home run in Red Sox history. According to the story on Boston.com, “The Sox were four outs from elimination against Cincinnati’s Big Red Machine in Game 6 when Carbo came off the bench to smash a three-run home run into the center-field bleachers, tying the score at 6-6. The blast set up Carlton Fisk’s arm-waving, 12th-inning walkoff home run for the ages.”

“I played every game high,’’ he said. “I was addicted to anything you could possibly be addicted to. I played the out field sometimes where it looked like the stars were falling from the sky.

All joking aside, Bernie has since cleaned up his act and, in doing so, saved his own life. Good for him.

And to think I thought I was hardcore after playing a baseball game at age 16 on hydrocodone (I was injured). Silly me.

Driving across the country is fun.

As most of you probably know, Austin & I along with three other neat guys made an amazing trek to the Pacific Ocean with extended stops in Hollywood and Las Vegas in that beautiful Nissan Altima you see in the picture above. Here are some of the things I learned.

1. When it comes to states, Kansas couldn’t be any more worthless. If you ever get the chance to drive through the entire state twice in one week, don’t.

2. Oklahoma City is bigger than you think it is.

3. Texas is a cool state, but they could definitely do without that top part. There is nothing of note there. And Amarillo skies are not worth writing a country song about.

4. New Mexico is just as odd as you would imagine. And Albuquerque has the best highway system I’ve ever seen. Very neat with alternating multicolored lights and all!

5. When driving trough the desert, don’t make fun of signs that say “Icy Bridges”. You will hit a blizzard when you hit Arizona and every bridge will be icy. But the trains look cool.

6. It is possible to drive from Missouri to Arizona without giving up the keys. I did it. And the state of delirium afterwords makes everything Austin Huff says funny.

8. Austin could single handedly overload the Twitter servers, no doubt. The man is a social networking phenom.

9. Venice Beach is full of lesbians looking for weed.

11. Laguna Beach is NOT full of beautiful people and video cameras.

12. What happens in Vegas, stays in Vegas.

13. Utah is my new favorite state.

14. The Rocky Mountains aren’t very impressive at 1 a.m. when visibility is hovering around the 0% range.