Skip to content
Let Me Be Frank With You
March 6, 2010 Frank

Well, since last week’s “Mustache Week” was such a huge success, I figured I’d continue the trend this week and have another special feature, “Ugly Week”. In this post I will give my opinion on the five ugliest athletes in all of sports (excluding hockey because I have never watched a game in my life and the NHL would probably take over all five spots on this list). Before we get to that I’d like to think Will for being the only person to participate in last week’s mustache challenge, even though he was horribly incorrect on most of the guesses. If you were playing at home and have been losing sleep trying to figure out who each mustache belonged to, fret not. Here you go:

Boy, that was fun wasn’t it? Are you down for having some more fun? Here’s my list of the five ugliest athletes in all of sports (in no particular order because they are all equally disturbing to look at). This is the second time I’ve written about Pat. He was also featured in the retired weekly post “Who Not To Start” back during football season. He grosses me out. 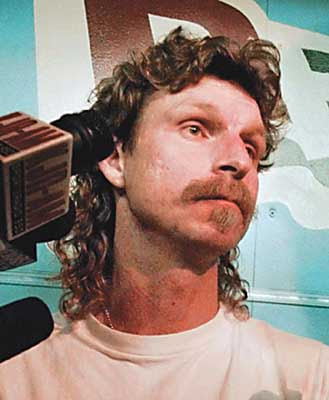 This makes back to back weeks Randy Johnson has been included in my top five. First for his lip hair, now for his regular hair, and face, and skin, and every other physical attribute.

If you told me this guy didn’t work at Blockbuster or Game Crazy I’d accuse you of lying.

I’m not going to touch this one. Literally. I might get warts.

First off, he spells his name wrong. Second, he somehow has managed to grow a random “center tooth” it seems. A true phenomenon orthodontists everywhere cannot explain.

Quit being happy. It makes everyone around you less happy.

It’s hard to take this guy seriously with 7 lbs. of hair gel oozing down his skull.

Vile excuse for hair. Pre-pubescent skin. Unbelievably gay looking. If it wasn’t me I’d want to punch that kid.

Now we know why Larry Johnson pulled the age old “Christopher Street” diss on this kid.

I thought I’d be nice and put Kyle in the honorable mention group even though we all can see he belongs up top.