Minnesota Vikings punter Chris Kluwe was nice enough to answer some questions for Korked Bats. Here’s what he had to say on the NFL, Donovan, kicking to Devin Hester and video games.

And I think he’s in a band. 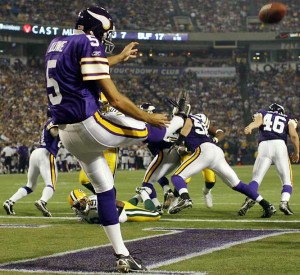 Thanks for agreeing to do this interview, everyone at Korked Bats is really pumped about it. Personally, I am a huge Chiefs fan, but the Vikings are a front-runner for my favorite NFC team, since my cousin is a HUGE Vikes fan.

How’d you get in to punting? Like, how does someone decide to be a punter?

I originally got into football because I needed a fall sport for high school. I played baseball and soccer growing up in California, and I didn’t want to do normal P.E., so I figured I’d try out for the football team as a kicker (I was a pretty good goalie and could kick the ball a long way). I turned out to be pretty good at kicking, and I thought to myself ‘Self, there aren’t many easier jobs than kicking in college and hopefully the pros, so let’s work hard at this’. Luckily for me I agreed with myself, went to some kicking camps, and now I get to dick around on Twitter and play video games all day.

How does the level transition work for a position like punting? Is there college recruiting post-high school?

It works just like any other position. The difference with kickers/punters is you have to be pretty good to get offered a scholarship/recruited coming out of high school since schools are limited in the amount of scholarships they can offer each year. UCLA offered me a scholarship a little after the start of my final year in high school after seeing me punt in one of their summer camps, as well as watching the start of my senior year punting.

The media makes it look like kickers get harassed a lot by other NFL players, how accurate is this? Stories?

There’s a little bit of that, because let’s face it, we don’t really do the same hitting and running other guys do, but it’s not nearly as prevalent as the media makes it seem (at least in my experience). When you’re on an NFL team, everyone is there to do one job, and that’s to help the team win, so it doesn’t really help the team if you ostracize players. I also tend to be pretty laid back though… unless you back baby into a corner. Nobody backs baby into a corner.

Your stipulations for Donovan McNabb getting to wear your #5 jersey were fantastic. How’d that all come about? It spread like wildfire. Feel free to plug your band as much as you’d like. We’ll even put it in bold if you want.

Well, I play in a band called TRIPPING ICARUS LOOK US UP ON iTUNES AND REVERBNATION AND FACEBOOK AND TWITTER and I figured rather than go the pedestrian route and sell my jersey for money, I could have some fun with it by having Donovan mention my band TRIPPING ICARUS ON VARIOUS SOCIAL MEDIA LISTED ABOVE WE PLAY GOOD MUSIC GO LISTEN as one of the terms of the deal, mainly to screw with the press. I honestly didn’t expect it to explode quite as big as it got though. TRIPPING ICARUS. 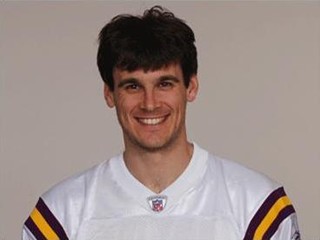 How’s everyone adjusting to Donovan?

It’s been great so far, he’s a funny guy with an awesome sense of humor and you can tell he really wants to succeed here. He’s been working hard to pick up the offense and get used to all the guys on the team, and hopefully he’ll lead us to some wins as well as serving as a mentor to Christian Ponder.

Any predictions for the upcoming season? Besides laughing that Tavaris Jackson has to play in the black hole known as Seattle? That might have been mean.

Now now, I almost played at Seattle (I was with them during the preseason of my rookie year) and it wasn’t quite a black hole. I rather enjoyed my time there. I did hear it’s the suicide capital of the world though, so, uh, yeah. They’ve got that. Prediction-wise, I think football will be played on various days of the week, between various football clubs (also known as ‘teams’), and that some of these ‘teams’ will win and some will lose. Also, at some point, there’s a large advertising festival known as the Super Bowl and there will be two teams playing in it, in between commercials.

Do you play fantasy football?

I do not play fantasy football. Mainly it’s because the one genre of video games I’m terrible at is sports games, which transfers over to fantasy football, but also because it just never appealed to me. I mean, they call it ‘fantasy’ football, but there’s not a single mage nor orc to be seen. What the [expletive].

Do you think they could incorporate punting into fantasy football? It’d help make you a household name. Points for inside the 20, net yards, etc.?

I’m sure they could, quite easily too, but no one really wants to celebrate punting because it means your offense just failed and now it’s time to go put another hot pocket in the microwave while you take a piss. The fantasy football higher ups have to keep people’s bladders in mind, or the world will degenerate into chaos.

So you are the punter who kicked to Devin Hester on his record breaking return a few years ago. Take us through that. Why did you kick to him? Is it even your fault, or some scrub just got juked? Feel free to drop names.

Well, I always wanted to get my name in the record books, and like they say, there’s no such thing as bad press.

I’m lying, there’s definitely such a thing as bad press.

The game plan for that game was to kick the ball out of bounds 25-yards down the field (which the defense loved, and also totally tanked my chances at the Pro Bowl for that year but I’m not bitter or anything) because apparently Hester is the second coming of football Jesus. So I kicked it out of bounds the first 4 times in totally shitty weather conditions, got to listen to the fans boo me because I called the field a dangerous ice rink that someone would get injured on (Brett says what’s up fellows) and generally was having an awesome time. Then I kicked one that didn’t quite get out of bounds, one of our guys got double teamed off the field of play and couldn’t get back on, and Hester went down the lane that got opened up. Now I’m in the record books. Hooray!

Apparently you love World of Warcraft? I’m pretty sure it’s the reason my roommate freshman year of college dropped out. What’s up with the WoW? You horde or… dammit I forgot the other side.

I used to play WoW quite a bit, and yes I played Horde. Alliance is full of child molesters and furries. Lately I haven’t been playing WoW at all; I have two daughters now and they take up quite a bit of time, and the latest expansion basically boiled down to “Don’t stand in fire and we’ll give you purplez” so I got bored and stopped playing. I’m sure once Diablo 3 comes out I’ll sell my children on the black market for epic gems though.

My favorite Guitar Hero song was La Grange by ZZ Top, as well as Cult of Personality by Living Colour. Least favorite were stupid pop rock bull[expletive] corporate garbage. Also, it’s a shame that Activision killed the franchise, but hopefully they’ve learned their lesson and will reboot it with a release schedule of something other than a sequel every week. 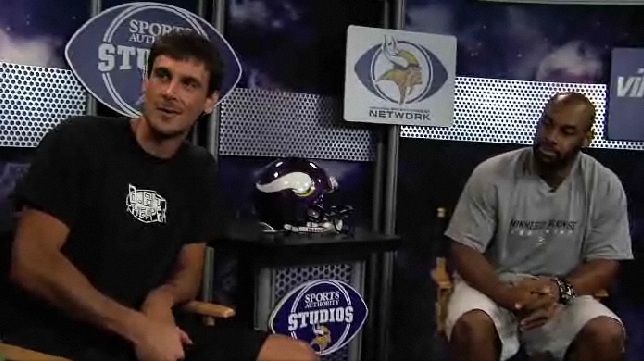 I’m pretty sure that gets you 25-to-life in Alabama.

You have 25,000+ followers on twitter, which by my records is 25,000+ more than any other punter. What’s your outlook on athletes, twitter and the controversy it occasionally causes?

I love Twitter because it lets me say stupid [expletive] and for some reason people want to read it. However, I always think VERY CAREFULLY about what kind of stupid [expletive] I put on Twitter because it’s very easy to put your foot in your mouth in front of a lot of people if you don’t think about the consequences of what you write. I think a lot of athletes on Twitter could benefit greatly from engaging their brain before putting their mouth in gear. This is the Internet fellows. Everything you say gets saved somewhere. Also, it’s a series of tubes.

Any games you’re particularly looking forward to this season?

Ones that aren’t outside.

Scariest player you’ve ever played against?

I don’t know that I’ve ever been scared of a player. That’s probably because I have a greatly inflated sense of my own importance though.

Most overrated player and team in the league?

Honestly I don’t watch enough football to know anyone other than the people on the Vikings, but I will say that Ryan Longwell has one of the highest field goal percentages made in the league for his career and he’s never been to a Pro Bowl. So you should vote for him this year. Otherwise he’ll be sad.

I think you should have a feud with another punter. Please take this time to call someone out and challenge him to something. This would seriously rock.

I would like to call out Mat McBriar for being Australian, and going to the Pro Bowl ahead of me last year, which obviously means he cheated somehow and should be ravaged by a pack of wild hyenas. Mat, I can totally take you on a bass solo… DID I MENTION I PLAY FOR A BAND CALLED TRIPPING ICARUS.

A lot of stuff I’d like to share, but can’t until after I stop playing because it would probably get me killed. Maybe I’ll write a book. A pop up book. With dinosaurs. HOLY [expletive] GO CHECK OUT TRIPPING ICARUS ALREADY YOU LAZY REJECTS.

Here’s another link to Chris’ band Tripping Icarus in iTunes:

Thanks again to Chris and the Minnesota Vikings.

This interview was conducted by Kyle. Be sure to follow Kyle and his jokes on Twitter: @kyleayers