Skip to content
PGA
January 3, 2010 Jared
Dang, that was a long decade.
Remember the Subway World Series? That happened last decade.
Remember the Music City Miracle, and then Kevin Dyson being drug down at the one yard line three weeks later in Super Bowl XXXIV? Last decade.
Remember when Al Gore wanted you to re-tally those votes, please? Yup, last decade.
Crouching Tiger, Hidden Dragon? You guessed it.
You know what else has been long? These athlete of the decade posts. Look, I know. But I don’t feel like this type of post can just be mailed in. So much has happened in sports. So many athletes have come and gone that I couldn’t have just post a 500 word blog and expect to REALLY figure out who most impacted the last 10 years.
But, just like the 00’s, our athlete of the decade posts are, at long last, coming to a close.
If you missed the last two posts, here is the first, where I explain why there are so many different lists, and here’s the second. 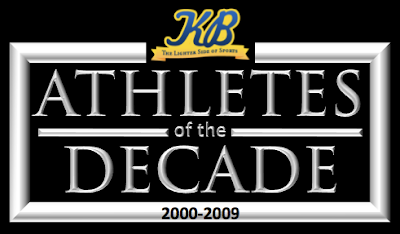 Best Athlete in an
Individual Sport
I feel like this category is pretty self-explanatory. The whole point in breaking all of these lists up was to let athletes be judged against other athletes that compete under similar circumstances. These are the guys that were the best at beating other individuals, not at fitting into a team and contributing to beating other teams.
By the way, some parts of these lists seem to be incredibly American and American sports slanted, and I realize that. I think I made it obvious when I discussed Brodeur, though, that I only know so much. Sure I can research other athletes in cricket or Australian rules football or rugby, but I’d just be talking out of my, uh, you know, as well as regurgitating what other people have said, and I’d rather not do that. I don’t necessarily insist that Americans and American sports are the best in the world, but that’s what I know best, and I don’t pretend to know a ton more.
5. Shaun White

THE NUMB3RS:
An Olympic gold medal in the ’06 Winters in the Men’s Halfpipe. 16 X-Games Skateboarding and Snowboarding medals combined, dating back to 2002. Countless other medals in something called the Mountain Dew Tour.
THE CASE:
I realize that Shaun White doesn’t really stand up with the other guys in this group. Really, I do. But I feel like everyone ignores White because his sports are less visible than others.* Maybe I’m weird, but it’s far more entertaining, to me, to watch guys fly through the air trying to flip and twist and grab and contort and twist…and then land on a 180 degree slope, than watching cars drive in circles at really fast speeds.
I’m obviously in the minority here, but White is among the best in the world in two separate, albeit similar, sports- and no one talks about him.
So this is the equivalent of me throwing a relative unknown in the last spot of a Heisman ballot just to give them a little love.
*I couldn’t justify putting a driver in here. I get it, you know? Jimmy Johnson is great at driving his car, so is Michael Schumacher, and so is Valentino Rossi. But I can’t consider a person an athlete if their greatest skill is being able to pee while driving. I’m sure that driving takes a lot of endurance and being able to wipe sweat from your brow and stuff, but I just can’t do it. Sorry.
4. Lance Armstrong

THE NUMB3RS:
He won the first six Tour de Frances of the decade. Then, in a return that seemed mainly driven by proving to French people that he doesn’t freaking cheat, OK!, he finished third in the 2009 Tour as a 38(!) year old- 11 years older than the winner, Alberto Contador.
Also this decade, he won the Tour de Suisse in 2001, and this race twice, in 2002 and 2003.
THE CASE:
The argument could easily be made that Armstrong belongs higher up on this list, but he’s only been relevant in one year since 2006, and, well, the guys in front of him are REALLY good.
I guess my take on Lance Armstrong is this: he really only has to get up for a big event once a year. That’s it. Sure, there are smaller tours and things in between, but those are all really just practice for the Tour de France.
Two of the final three athletes in this list play at least one tournament a month, and four BIG tournaments a year. I guess I just value that more than one HUGE race each year.
But that’s just me.
3. Roger Federer

THE NUMB3RS:
He played in at least one ATP tournament singles final each year of the decade, and won one in every year except 2000, when he was, oh, 18 years old. Roger has won at least one major singles title each year since 2003. He won at least two majors in a year five times, and at least three majors three times.
At age 28, he’s only the 6th mens tennis player ever to complete the Career Slam (winning Wimbledon, French Open, Aussie Open and US Open at some point in their career).
He hit this shot.*
Oh yeah, and then there’s that one thing where he became the all-time singles major titles leader in ’09, with 15.
*I love that shot for so many reasons. Of course, it’s an absolutely lovely shot, but it was probably more luck than anything else. No, the best part about that shot is the fact that it absolutely humiliated Novak Djokovic, a player that I absolutely cannot stand.
I don’t know what it is about tennis, but it seems to be a sport- much like golf- that is very conducive to disliking a lot of the athletes. I suppose a big part of that is the preconceived notion that golfers and tennis players are rich little country club boys- a fully deplorable group. Then add in Djokovic’s arrogance and aura of toolness, and he’s a very unlikeable fellow.
THE CASE:
Like all of the other characters on this list, the argument could be made that Federer belongs higher. He’s arguably the greatest mens singles player ever, and he did ALL of it in our nice little 00’s window.
But I just can’t shake the fact that Federer couldn’t seem to beat a fully healthy Rafael Nadal. I understand that the larger sample size says that Federer is probably a better player- that Nadal is just a bad match-up- but Federer is 7-13 against Nadal. I just can’t help but think that, if Nadal were healthy in ’09, Federer wouldn’t be the all-time majors leader right now.
That’s something I just can’t shake.
2. Michael Phelps

THE NUMB3RS:
Between the two Summer Olympics last decade- Athens and Beijing- Phelps won 14 gold medals, and took home 16 total Olympic medals. He won 22 World Championships gold medals, and 26 total.
Phelps actually made the US Olympic swimming team as a 15 (!) year old, and finished fifth in Sydney in the 200 meter butterfly. 15!
Phelps owns 29 individual swimming world records, and is also a part of eight other world records for relays.
His eight gold medals in Beijing were the most ever in one Olympics,* and Phelps’ career 16 Olympic medals trail only Larisa Latynina (18) for most all time- in either Summer and Winter.
*I very much respect the argument that Olympic medals don’t really make a ton of sense. A basketball team plays eight games over a span of a month and only gets one medal to show for it, and yet one 200 meter swim relay is good for just as many medals. It’s bizarre. So I’m not necessarily in the school of thought that Phelps is the greatest Olympian ever. But he is the greatest swimmer ever, and that’s what I’m going by here.
THE CASE:
I realize that I downgraded Lance Armstrong for only competing once a year, but I put Phelps in front of him even though he only competes in the odd years and the Olympics every four years. I know.
But Phelps’ splash in the ’08 Olympics was nothing short of transcendent. He went into that mythical “this guy simply cannot lose”* zone that we’d like to think our athletics heroes can transform into. We always like to believe our favorite athletes have a little bit of non-human in them, and Phelps made us believe that during the Summer of 2008.
I realize this seems like a bit of an emotion pick, and it may be, but Phelps reminded us why we love sports. I’ll never forget it.
*Phelps’ miraculous finish in the 100 meter freestyle gets my imaginary vote for sports moment of the decade. It was at that moment that I felt like I was watching something non-human, that if a it’s-impossible-for-me-to-lose attribute truly exists, he had it. It really changed what I thought humans were capable of, and, well, what else can you say?
1. Who else? Tiger Woods

THE NUMB3RS:
Eldrick won each of the four major championships three times this decade, giving him 12 total for the 00’s- better than any of Nicklaus’ best decades, and more than Arnold Palmer and Tom Watson had for their entire careers.
He has 56 PGA wins this decade, which is absolutely staggering to me. He was the number one money earner on tour seven times, which is also staggering considering that he missed most of one year with a knee injury, and spent most of the decade only playing big tournaments and majors.
He started the decade by completing the Tiger Slam, which is basically a cool name for winning four straight majors, albeit not in the same year.
I could go on with the numbers, and you know I could. All the weeks at number one. All those tournaments and majors without missing a cut.
Statistically, no one touched him this decade, and no other golfer ever proved to be able to compete with him (unlike his friend Roger Federer).
THE CASE:
Tiger is the guy here, and you’d have no chance to convince me otherwise.
Tiger was so dominant that a study was done by a college professor to find out if other golfers played worse when Tiger was playing- and it turned out they did! I can’t imagine that any athlete last decade had that kind of measurable impact on his sport. People often say things like ‘other people are terrified to compete against ____,’ but it was statistically proven to be true with Tiger.
Absolutely insane.
Which is, in fact, what I’m close to after writing over 5,000 words over the last five days. Cheers, and a Happy New Year/Decade to all.

One thought on “Korked Bats’ Athletes of the Decade – Part 3”