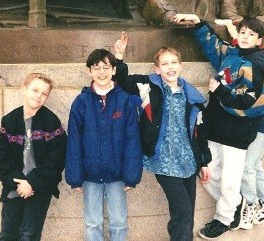 The competition between my oldest friend Kevin and I continues, and let me tell you, things aren’t looking good for Kyle here. I had a premature celebration last week, and all of my hope went down the drain like the Chiefs’ entire season. I got this email from Kevin earlier in the week:

Ok, so he’s right. He is destroying me. BUT THE SEASON IS YOUNG. Just young enough for Mark Sanchez to date. So, let’s do this.

And be sure to check out last week’s post to see the stakes: MLB team pride.

Why is it that all that crosses my mind when the Bills are being talked about is the Music City Miracle? Oh yeah, because that was awesome. Buffalo should cruise by the Bengals, and then after the game there’s a high probability that a Bengal’s player will get arrested.

The Bears O-line gives up 12 sacks but Jay Cutler leads the Bears to victory after a Bears fan punches Mike Martz in the face (have I mentioned before that I don’t like Mike Martz?).

Are you there Chris Johnson? It’s me, Margaret. Wait a minute. I wouldn’t understand Chris Johnson’s answer even if he were there. العب اون لاين مجانا

Without Miles Austin and with a hurt Dez Bryant and Felix Jones, the semi-injured Tony Romo leads his team… look at how many people are injured on the Cowboys! There’s no way they win!

I think the Cowboys find a way. Dez will go.

I don’t know. I really don’t know… how much the Vikings will need to be up by after the first half to not blow the game.

The Vikings are 12 minutes of football away from being 3-0, but the Chiefs have to win at some point.

I don’t even know how to make the infinity symbol on a keyboard. Ú”’ÆÚ˘Ú˘ nope, can’t find it.

I need LeSean McCoy to keep the scoring up because I want to continue to win in my fantasy football league, so he’s going to score all 34 points. He should kick the field goals too. سباق الخيل مباشر Also, I don’t care about anything that’s going on with Mike Vick at this point.

I don’t think Houston is for real anymore. I still think it’s them or the Titans that are winning the division, but it’s almost by default because of how bad the Colts and Jags are.

“By the way, did anyone see Troy Polamalu in the SI season preview? He looked fat.” – Kevin

I’m tempted to pick Seattle here because of the home field advantage and because of how awful the Falcons seem to play away from their own dome. Alas, I’m picking the Falcons. And yes, I just used the word “Alas.”

Attention: Eli Manning, Hakeem Nicks is on your team! Throw the ball to him! Not Vicor Cruz!

Really no justification except I need to catch up in this contest.

The Packers could probably beat the Broncos if all three of the Denver quarterbacks were playing at the same time (I’m talking 14 on 11, not just having all three QB’s playing different positions). On second thought, that was a stupid comment. مراهنات التنس The point is the Packers are much better than the Broncos.

This won’t be pretty.

Tom Brady coming off of a loss to the Bills is not something I would want to see if I were the opposing team.

San Diego is going to have a decent start to the season this year because the teams they’re playing against are too terrible to take advantage of the Chargers trying to give away the games.

Kevin is spot on here, too, I hate to say it.

Both of these teams will try to do horribly on offense just to make their defensive stats look better.

I think the only time I’ll pick the Colts to win without Peyton Manning behind center this season is coming up next week.

Stupid Kevin taking a shot at the Chiefs a week early.

So there are the picks for this week! Let’s take a look at where the competition is now: