LOS ANGELES- Last Saturday, the Wisconsin-Arizona State game provided one of the craziest endings in college football. Down 32-30 with under a minute to play, Wisconsin QB Joel Stave centered the ball at Arizona State’s 15-yard line for an easy game-winning field goal. But Sun Devils linebacker Anthony Jones jumped on the ball, thinking Stave’s knee did not touch the ground. Officials ruled Stave down, but did not clear Jones off the ball and actually held Wisconsin from snapping the ball before time ran out. Arizona State won the game, 32-30.

Last night, during Jimmy Kimmel Live!, host Jimmy Kimmel revealed to the audience that the ending to that game, which had the nation buzzing for the past few days, was all just a hoax he created. 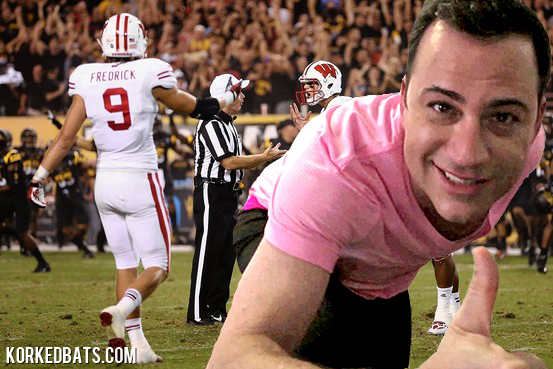 “So there you go. To the conspiracy theorists on the Internet who thought the ending to this game was unreal, you were right. It wasn’t real,” Kimmel giggled.

Kimmel debuted a never-before-seen “director’s cut” of the game’s ending on his show last night. This version showed that while Stave was arguing with the referees, Jimmy Kimmel, dressed in a pink shirt and yoga pants, walked onto the field and began spraying everyone with a fire extinguisher. He then walked up to the camera and gave a thumbs up.

The game’s officiating staff was brought out on to the show and Kimmel revealed the video’s head referee, Jack Folliard, is actually a guy named Pat Gunther who is really just a corporate printer salesman from Virginia.

“This was actually my first football game to attend,” Gunther said. “If it looked like I didn’t know what I was doing, it’s because I didn’t.”

The rest of the staff admitted they didn’t know what they were doing either.

“So what do the rest of you do for a living?” Kimmel asked. “Oh, we’re actually Pac-12 referees,” one of the officials said. “We were severely reprimanded by the conference today. In fact, our back judge Steve Steichen was fired,” the official continued, as Steichen waved to the camera.

Things then got awkward for a moment before Kimmel revealed that he swore the officiating staff to secrecy, so no one knew about it, including Arizona State.

“Did you see that big guy at the end of the video running down the field with a seizure?” Kimmel asked. “Yeah, he still thinks Arizona State won. In fact, he’s probably still convulsing.”

This marks the second nationwide hoax Jimmy Kimmel has pulled off in as many weeks.

Kimmel wrapped up the show by saying, “Thank you for helping us deceive the world and hopefully put an end to horrible officiating forever.” The late night talk show host later admitted that this is the only Big Ten game he was behind.

“I promise, the Big Ten being bad at football isn’t a hoax,” Kimmel confessed.