Ladies (and men who are ‘too busy’ or ‘too hipster’ to care about sports),

Last night, I was tested on my sports knowledge. Guess what. I failed. I decided that I needed to look up a few stats to help me through the next two days of the work week. I don’t want to see you fail also. Unless of course we’re both trying to woo over the same guy. Then I will do whatever it takes to make you fall flat on your face. Literally. But if we’re not going after the same guy, here are a few starter ideas for some of the water cooler chit chat.  Stick to the script and you should find the following conversation starters useful:

(This is Joakim Noah.  He is a good basketball player for the Bulls.) 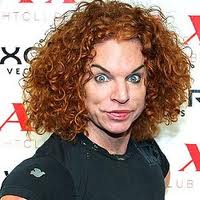 This is Carrot Top.  Actor and or Comedian and or Street Performer.

He probably does drugs and should not be mistaken for Joakim Noah.

Finally, last and most certainly least: the NHL.

Please print out these topics of discussion, because it is important to not go off script in situations that happen around the water cooler.  Enjoy knocking the socks off of people.  You’re welcome.