As I was taking in coverage of Monday night’s Home Run Derby, it struck me how unbelievably large Albert Pujols’ cranium has gotten. I mean literally, look at it: 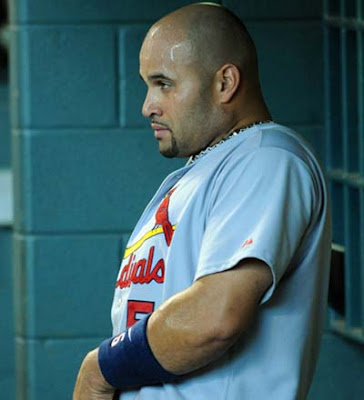 So I got to thinking, and I came up with a few other guys whose heads have swelled to ridiculous sizes over the course of their career: As I looked over these images, it dawned on me. The truth. Albert’s secret. That’s right people, just like Barry Bonds, Jose Canseco and Sammy Sosa, Albert Pujols…

Was born on an even year! Weird, huh? I mean, I couldn’t come up with any other connections between the four. Other than they all have put up historic power hitting totals. That can’t be linked to big heads, can it?

Maybe people born on even years have a special testosterone called Head Growth Hormone?
Or maybe, on even years, doctors put some sort of Potential Enormous Dome cream on newborns?
Perhaps even-year babies drink more Juice than milk?
I feel like I’m missing something, but I just can’t quite wrap my head around it. Maybe it’s just not big enough.

One thought on “I’m Onto You Albert…”