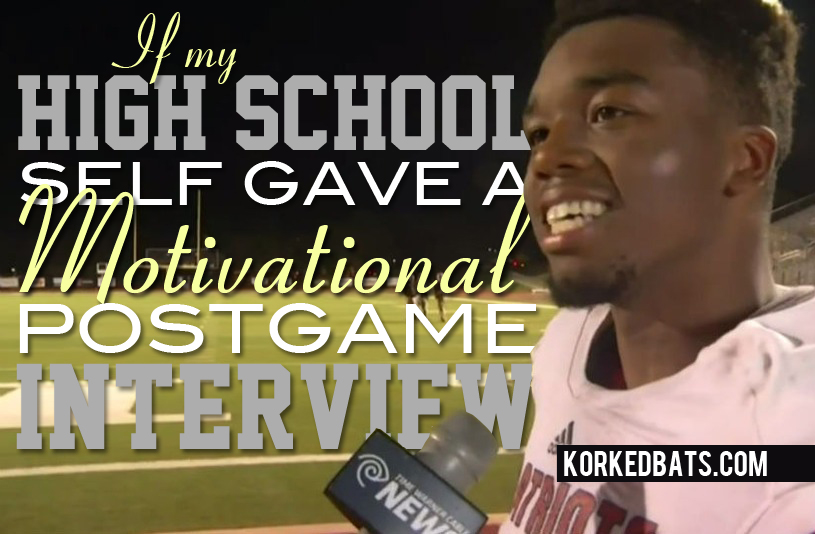 By now, many of you have seen the motivational post-game interview by East View Patriots (Texas) wide receiver/running back Apollos Hester.

Now, as I’m sure many of you would agree, Apollos isn’t like most high school students. No one age 14 to 18 is that happy. Not even after sneaking into an R-rated movie.

So this made me think, what if I was in Apollos’ shoes? What would my post-game interview sound like? Well, I gave it a lot of thought and decided to write it down. Guess Apollos was right. Anything I can put my mind to I can accomplish!

Reporter: Hey Joaquin, I’m out here with Austin, running back for the Patriots. You guys had one heck of a game tonight. Uh, how’d it go? I mean, it was going a little back and forth. You guys knew this was going to be a tough dogfight out there and it was, so what were you guys able to do to come back and win this thing?

My High School Self: Alright well, at first we started slow. And you know, that’s alright. Because I start slow every morning when my alarm goes off. In fact, I’ve racked up two in-school-suspensions for being tardy to first period alone. My mom has gotten to the point where she’s so tired of waking me up and making my breakfast in the morning, nowadays she just throws the toaster at me while I lay in bed, which usually tends to wake me up. And that’s ok. We told ourselves, ‘We’re gonna start slow. But we’re going to finish fast.’ Like that economics midterm project. I was really slow in starting it, but on the night before it was due, I finished it fast! We’re ALWAYS going to finish fast. Yeah, they had us in the first half. I’m not going to lie. We weren’t defeated, but they had us. It was like Mrs. DeMarco’s Algebra 1 class. But it took guts, and it took attitude, and it took a piece of crumbled up notebook paper with the algebra formulas on it. That’s all it takes! That’s all it takes to be successful. Well, that and rich parents. And that’s what our coach told us. He said, ‘Hey, it’s going to be tough. It’s going to be hard. You’re going to go out there. You’re going to battle. You’re going to fight. You’re going to do it for one another. Or whatever girl you gave your away jersey to this week, hoping it will get her to like you more. You’re going to do it for her. You’re going to do it for each other. You’re going to do it for yourself. You’re going to do it for us. And you’re going to go out with this win! And then afterwards, you’re going to give a motivational post-game interview that will probably be more motivational than this speech I’m giving you now. So when you do, kind of beef up my speech to make it sound pretty inspiring.’ And we believed that. We truly did. And it’s an awesome feeling. It’s an awesome feeling, like climbing the ropes in gym class. It’s an awesome feeling when you truly believe you’re going to be successful. When you truly believe you are going to attend a community college for a few years, before ending up at a state school and going to work for your dad’s accounting firm after graduation. Regardless of the situation. Regardless of the SCOREBOARD! Regardless of the poor grade you got in Mrs. Hemsworth’s Spanish class! You are going to be successful because you put in most of the time, some of the effort, and not that much hard work. And it’s going to pay off. And if it doesn’t pay off, well, you’ll just have to deal with a lifetime of hearing about how great your older sibling was and continues to be. If you lose the game, you continue to half-ass it in practice because, to be honest, some days you just don’t feel like practicing. And that’s what we realized. Win or lose, we are going to be alright. We’re “football players” and people respect football players more than any other social group in school. Why? I’m not sure. Mainly because my IQ is roughly 60 points lower than just about every social group in school. But if you bring that up, I’ll slam you into the lockers, dweeb! So, win or lose, we’re going to keep smiling. It’s awesome! Awesome! Awesome! *squirts fruit punch flavored Mondo in mouth*

Reporter: Austin always has a smile on his face. Talk about attitude, this guy’s got attitude, if you couldn’t tell. We met earlier this week, and this was the enthusiasm I saw when he tried to get my number. Even though I know he has a girlfriend.

My High School Self: It’s a mindset. Hey, you can do anything you put your mind to. Never give up on your dreams. Keep smiling. Occasionally ask off work from the American Eagle in the mall that you work at. No matter what you’re going through, just get up. It’s that simple. Unless it’s a breakup with Jennifer Quinn, the most beautiful girl in school. Then, I know how you feel. If that happens to you, just lay low for a few weeks. People will be looking at you in the halls, still in disbelief that the captain of the football team broke up with the captain of the dance team. Just lay low, listen to a lot of Dashboard Confessional. Maybe a little James Blunt. If after a few weeks, you still can’t get up from this deep state of depression. You’re friends are there to help you. If they’re still pissed that you broke up with her because you wanted to “hook up with that reporter girl from the football games,” then your momma’s there, you’re daddy’s there… If they’re pissed because they’re “good friends with Jennifer’s parents” and they “can’t believe you would do that to such a sweet girl like Jennifer, I really liked her,” then James Blunt is there… for you to listen to. It’s going to be alright. I… I… think. *starts sobbing*

Reporter: Man, along with all of the football highlights you guys have gotten tonight…

My High School Self: [interrupts] I MISS YOU SO MUCH, JENNIFER!

Reporter: Some depressing speaking courtesy of Austin. Great game tonight, buddy. So happy for you guys. This guy with one touchdown and a whole lot of…

My High School Self: [interrupts] JENNIFER! PLEASE CALL ME!

My High School Self: [interrupts] IF MY PARENTS ANSWER JUST SAY YOU NEED TO TALK TO ME FOR A GROUP PROJECT! I’M CURRENTLY GROUNDED FROM TALKING ON THE PHONE! SAY IT’S A GROUP PROJECT! *starts singing James Blunts’ “Goodbye My Lover” at the top of his lungs*

Reporter: Ok, I think he has turrets. Back to you in the studio.