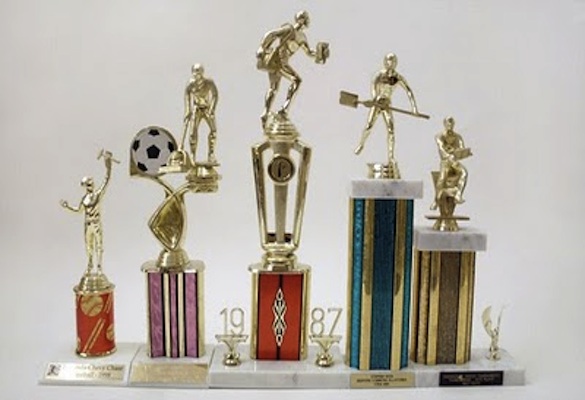 What was the best part of Little League? The concession stand. But, second to that, it was the trophy that you got at the end of every season.

My room was packed with those little golden heroes, and I was proud of every one of them… until now.

Now, they just remind me of how I stopped getting trophies a long time ago. I couldn’t even tell you the last time I accomplished anything trophy-worthy. But I thought about it, and it’s not entirely my fault.

I graduated high school… no trophy for that? That “team” got a solid four seasons out of me, and what did I get in return? I got a piece of paper that allowed me to go to school for another four years.

I was a good sport though. I knew that Ozzie Smith wasn’t an All-Star after only four years. I saw this as my chance to move up from the minors into the big show, so I took it. I went to college.

I made some notable contributions playing for team college, and overall I think I was a pretty great addition to the roster. As graduation neared, I had a space cleared out on my shelf and everything.  My golden god of victory would stand tall and proud as the focal point of my bedroom, but when the day came, no trophy.

Instead, all I got was another piece of paper. This piece of paper allowed me to maybe be able to get a job someday, somewhere for eternity… What the heck kind of reward is that?

“Well done, Chris. You graduated with a great degree from a respected university.” Your reward: being poor forever.

It’s kind of like if someone saw your child drowning, dove into the lake and rescued them, and when they brought your kid back to you, you just punched them in the face.

Not getting a 5-foot tall, solid gold trophy for graduating college is like if it’s pouring down rain, someone gives you their cab so you don’t have to wait in the storm, and then immediately after they close the door, you have the driver turn around and run them over.

All I’m saying is, I need a trophy. My room looks empty, and the walls are bare because I’m not sure what kind of stuff I’m supposed to put on them now that I’m out of college.

Do Radiohead posters still count as proper decor? I don’t know. Should I just paint the walls? But then what do I do after that, they’re still going to be bare-walls. Do I have to get throw-pillows? That’s like, for girls though, right? I didn’t learn any of this in college…

You know what else I “didn’t”  in college? I didn’t get a trophy.

Radiohead posters or not, if I had a trophy in it, my room would at least look like I maybe did something cool once. Life is all about respect, and trophies demand it. When you put it like that, it’s simple: Life is all about trophies.