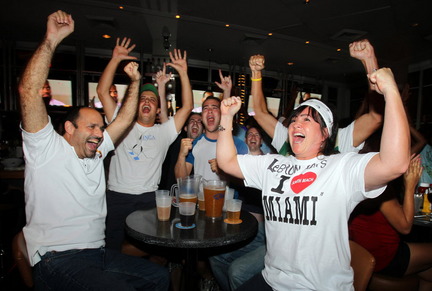 The NBA Finals begin tonight as the Miami Heat travel to Oklahoma City to take on the Thunder in Game 1 of this highly anticipated match-up. Meanwhile, back in Miami, fans are already excited and have begun preparing for the series.

“I saw a commercial for the NBA Finals like 15 minutes ago,” claimed Jim Quincy, self proclaimed Heat super fan. مراهنات المباريات “I was so excited, immediately finished ironing my shirt, listened to the unplayed messages on my answering machine, played with my puppy, and then went straight to my TiVo to record Game 1. I really can’t wait to watch it when I come in for lunch from the beach tomorrow, or something.”

Jim Quincy, like many Heat fans, has been a die-hard fan since last Wednesday. Jim recalls that “epic Game 6 vs. Boston” and that “exciting Game 7 vs. كيف تربح المال من الالعاب Boston” as two of his favorite moments in Heat history.

Miami Mayor Tomas Regalado states his city hasn’t shared excitement like this in quite some time. “There hasn’t been this much semi-buzz around the city since Colin Farrel was in town shooting that Miami Vice reboot with the black guy who played Ray Charles,” Regalado said. “I can honestly say we take as much pride in our Heat as we do for Colin Farrel. Have you guys seen Phone Booth?”

According to TiVo’s stats and information department, Miami has the highest number of recordings for the NBA Finals Game 1 per capita in the entire country.

“I didn’t want to delete any episodes of Dance Moms, Pawnstars or House Hunters, so I only had enough room on my TiVo to record the first three quarters,” Heat fan Cameron Zimmerman said. “But at least I’ll see LeBron at his best, amirite? مواقع المراهنات العالمية !”

Don’t be fooled, though. Heat fans are also very excited for the Heat to return to Miami for their home games. “I have tickets to Game 3,” Heat fan Ryan Patrick said. “But I probably won’t show up until Game 4.”