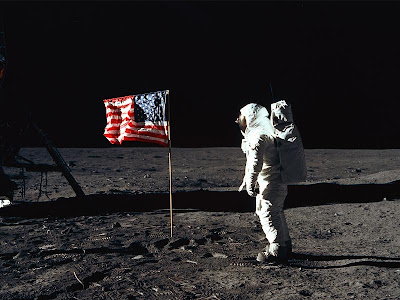 A couple of days ago, I received the following text from Austin Huff:*

“Hey you gorgeous, talented man, you. If your pretty little head can find some time in the next few days, would you mind writing a blog post about the 40-year anniversary of the lunar landing? Try to relate it to sports if you can. You’re so clever and talented, I feel so secure putting this post idea in your muscular arms. Thanks.”
*I accidentally deleted the text he sent me, so I had to do my best to summarize what he said.
Quite literally the first thing to come to my mind was this: “40 year’s huh? That means we landed on the moon in ’69. Heh heh.”
I thought about making this post be a giant sexual innuendo, but that doesn’t really relate it to sports, so I stripped that idea. (That’ll be my only one, I promise!)
What I ultimately settled on is this: I love making use of Blogspot’s “bulleted list” function, and there are way more connections between July 20th, 1969 (heh heh) and sports than you would think. Coincidence? Probably so, but I’d like to think this is what Austin was going for- a bulleted list that brings together the Lunar Landing and sports.
Let’s see if we can’t make these seemingly polar opposites 69!- er- come together- er- procreate- er- (awkward pause)…uh, yeah.
HAPPY 40th ANNIVERSARY
LUNAR LANDING DAY!