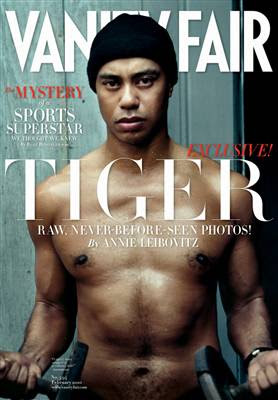 So apparently Tiger Woods is set to appear on the cover of the February 2010 issue Vanity Fair, which is set to hit newsstands on January 12th.

Which on a side note real quick, why do magazine’s do this? Why do the release next month’s issue in the middle of this month? I mean, in a way it’s kind of cool because it’s like a magazine from the future! But like the movie the 5th Element, we realize quickly that it’s obviously not from the future and just a bunch of garbage.

The picture on the cover is apparently a “never before seen” photo of Woods pumping some iron (not like iron as in golf club, but like iron as in… ya know what, you get it). Because there is nothing better than putting a guy on your cover who has been the center of our nation’s media attention because of his failing marriage and countless mistresses, lifting weights and looking tough.

Like really was Demi Moore not pregnant enough this month? Was Madonna still too irrelevant in society? Did Brad Pitt finally find a pair of pants? Why did you ever deem it necessary to resort to putting Tiger Woods on your cover?

And why would you put such a deceiving picture of him on the cover? Obviously Tiger Woods isn’t strong. If he was strong he would have been able to say NO to any potential mistresses. Call me crazy, but that’s what a real man would have done. Call me crazy again, but I am just a one girl kind of guy. And call me crazy a third time, I’m pretty sure every guy should be… ESPECIALLY if you are married. (Ok, you can stop calling me crazy now.)

If you have to put him on your cover, at least put up a picture of him that is more suiting to his lifestyle. Like him swinging a golf club or heck, even this.

All I’m saying is that this was a pretty dumb cover model for Vanity Fair. I’m sure it’s still going to sell thousands of copies because America is entrenched in this saga. But still, give these “never before seen photos” a rest for a couple more months. You didn’t see a magazine throw up Osama Bin Laden on their cover right after September 11th, 2001, did you?

One thought on “Golf/Adultery Has Never Looked This Tough”