If we’re being honest, I’m a one-trick pony.  I am good at making lists of things, and little else.  So as I was watching pre-season football last night (something I could have never said before in my life), I thought to myself, “what is the average fan going to be surprised by this season?”  Besides dozens of  illegitimate children, Tom Brady growing some lady-hair, and Peyton Manning’s giant forehead fivehead, there are plenty of things the average fan needs to be alerted of:

1. The Eagles are not the new Miami Heat.

Many have crowned the star-studded Eagles roster as the football equivalent of the Heat.  The only thing the two teams have in common is a lack of a championship.  Beyond that, most comparisons fail.  The Eagles haven’t thrown a party for themselves, they haven’t guaranteed multiple titles either.  Players are flocking to play there and getting paid to do so.  I wouldn’t say Mike Miller, Udonis Haslem, and Juwan Howard are nearly as heralded as the Eagles free agent signings (Nnamdi Asomugha, Sean Ellis, Steve Smith, Justin Babin, Ronnie Brown to name a few).  The real question is, will the Eagles face the same animosity the Heat faced last year?  My guess is no, and here’s why:

a) Michael Vick is generally acknowledged as the most exciting player to watch and the greatest Madden player of all-time (if you don’t believe me play Madden 2004 on PS2 and then write me an apology email).

b) The Patriots have more hated players on their team (Albert Haynesworth and Chad Johnson).

c) The Eagles play football and the Heat play basketball.

d) Every time I think of the Eagles, I can’t help but picture Tony Danza as the Garbage-Picking Field Goal Kicking Philadelphia Phenomenon.

2. Phillip Rivers will be the most valuable fantasy football player, but might not win a playoff game. 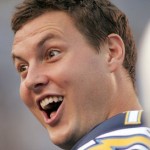 I’m not just predicting this because he looked impressive in the first quarter of a pre-season game last night.  Let’s factor in a few things: Rivers has his number-one receiver back (Vincent Jackson) and that receiver has something to prove after sitting out most of last season.  He also still has the best tight-end alive on his team.  Factor in a weak AFC West and you’ve got the formula for some serious fantasy numbers.  However, Norv Turner is still their coach.  With 4 playoff wins in 20 years of coaching, I don’t have much faith in the guy.  Some teams are just built for the regular season- like the 2010 Cincinnati Reds, the 2001 Seattle Mariners, or the 2010-2011 San Antonio Spurs.  I believe the Chargers will be one of those teams.

3.  The Lions defensive line will murder an opposing quarterback. 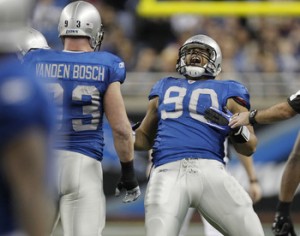 Ndamukong Suh and Nick Fairley are two of the most hyped D-linemen and are actually on the same team.  Assuming both players are healthy, I predict most teams will unsuccessfully run 75% of the time against the Lions.  Would you trust your line to protect your franchise QB with those guys lining up just a yard away?  I fear an out-lash of anti-violence sentiment will sweep the country after Fairley goes low while Suh decapitates a poor quarterback.  The real questions?  Will they end the football game because of the recently deceased quarterback?  Probably not.  Will I feel awful if this comes true?  Maybe…

4.  Someone will come out of retirement and none of us will be shocked. 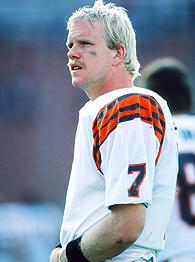 Of course there are the front-runners out there like Randy Moss and Brett Favre.  Their returns would surprise very few.  But I’m really holding out for another group of retired players to consider a comeback.  Here’s my short wish-list of players:

Kurt Warner- he recently tweeted about elements of playing football that he misses.  You can’t tell me that 20 out of 32 teams wouldn’t rather have a rested Warner than their current option.

Barry Sanders- he’s had years and years to recover from a brutal career at running back.  If Sanders announced his return today, I’d put $10 on the Lions to win the Super Bowl.

Lawrence Taylor- I don’t really want to see him playing football, but I figure if he’s on a team, he’s less likely to be involved in the awful acts he’s now infamous for.

Boomer Esiason- I’d like him to come back for a few reasons.  First of all, he has one of the greatest first names in sports history.  Second, I live near Cincinnati, and can’t stand the thought of Bruce Gradkowski and Andy Dalton quarterbacking the team for the next five months.  The Bengals should either convince Boomer to come back, or pick up Jamarcus Russell so they’re guaranteed to go 0-16 and win the Andrew Luck lottery. Suck to get Luck.