Skip to content
Uncategorized
September 22, 2009 Guest
Who are two of the biggest media hogs (pun not intended) this country has seen in the past 9 months?
Tim Tebow and Swine Flu. 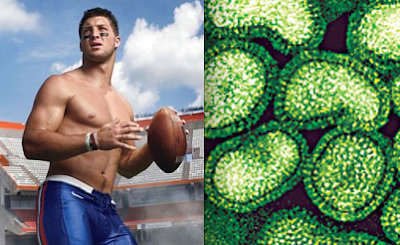 What happens when you mix them together?

He cured it!
No, we’re kidding again. He didn’t cure swine flu.
He cured CANCER!

We’re serious about that second one. However, according to a recent ESPN.com report, the swine flu pandemic has spread to the University of Florida campus. Gee, thanks for the update Mothership. What is this the Health Channel? Urban Meyer is now scared it is going to spread to his football team. Three players already had the flu for the game this past weekend.

The game that could quite possibly be one of the worst wins for Florida football in recent years.

You know, this was the game that the Gators were favored by 30 points. The game that Urban Meyer was supposed to run up the score on Lane Kiffin for all the controversy he started in the off season.

Well he sure ran up the score. Ran it all the way up to 23! He really shut up Kiffin. Really stuck it to the man.

When asked if he was worried about the flu affecting Tennessee this year, Kiffin replied:

“I don’t know. I guess we’ll wait and after we’re not excited about a performance, we’ll tell you everybody was sick.”

ZING!
Hilarious. Maybe Kiffin should give up coaching college (or any level) football (because right now, well, it’s not really working for him) and give Wilmer Valderrama a call and see if he can get a shot on a new season of Yo Momma on MTV!

When Lane Kiffin’s wife was asked about her husband’s debut against an SEC opponent, she responded by saying…

Of course, if Urban Meyer thinks that the swine flu was a problem this past week against Tennessee, just think of how sick Arkansas is going to make them! (insert “sitcom live studio audience laughter” here)

Goodnight folks! See ya next week!

One thought on “Flu-rida Gators”