This weekend was so insane that I had to set 5-minutes aside for sports.

So I turned on the TV and found the first thing that had ESPN labeled on it.  Well, I just so happened to turn to the bottom of the 9th of a College World Series game.

It looked like this game was between the South Carolina Gamecocks and Texas A&M Aggies.  The Gamecocks?  This flying wild boar looks horrifying, but a wild boar that can fly can only be taken seriously if you are an avid watcher of LOST.  Even though Texas is where happiness goes to die, I think in this case, anything is better than a flying boar in this mascot battle. 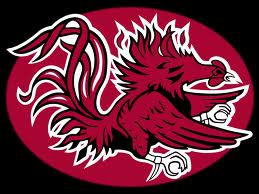 I’m not going to lie.  I always thought that baseball players were the best looking athletes, but last night, I saw quite a few goatees. Note: Goatees ruin faces.

Texas A&M’s last chance pitcher, Nick Fleece, was under quite a bit of stress it seemed.  I guess if he messed it up, than the guy with the gold chain chewing a gigantic piece of gum, who is trying to bunt, could finish this game up.

The camera then panned to the South Carolina bench.  The guys were wearing their sunglasses and hats upside down. The announcer didn’t seem to miss a beat and informed the audience that this was perfectly normal for this time of the game and that these gentlemen were wearing their accessories “shark-style.”  Nope.  That doesn’t make any sense sir.

The bases soon became loaded with South Carolina still up to bat.

A ball and two strikes.

I was getting really into the game.

SOUTH CAROLINA WINS?! I didn’t see this coming from a mile away.

“If he’s not dirty, they aren’t winning,” is what they say about the gentleman that hit the winning base, Scott Wingo. 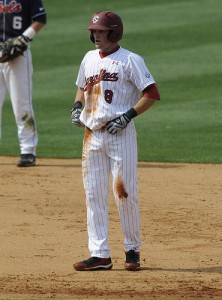 I wouldn’t say this is something I would want people to say about my teenage daughter, but I guess this is working for Scott Wingo. However, I feel sorry for his wife, girlfriend, mom, or whoever it is has to get those dirt stains out of those white uniforms.

I also can’t wait to ask my co-workers about how this baseball series ends.  Maybe this series will last as long as the NHL playoffs, or heck, as long as it took for OJ to not be convicted.  That’s an entire 5th grade year I’ll never get back.