The National and American League Championship series are going on right now but all of America (excluding Philadelphia, San Francisco, New York, and Dallas) wouldn’t know it because it’s NFL and college football season.

However, we must give them props for their recent taunting of San Fransisco Giants pitcher Tim Lincecum and outfielder Pat Burrell in NLCS Games 1 and 2. لعبة بوكر Heck, we’ll give them props for anything they do during the games that doesn’t include those annoying rally towels. And those annoying Fargo hats as the man in the upper right corner is displaying proudly. 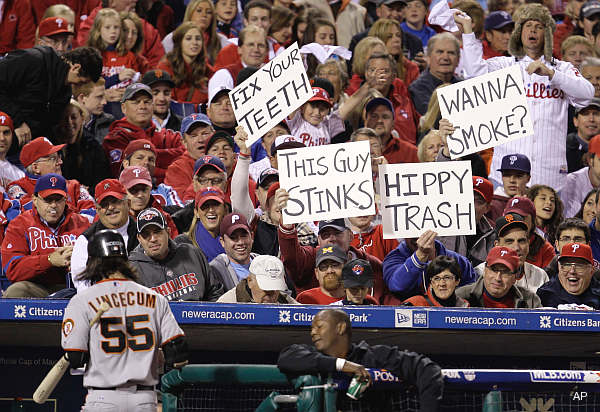 Any non-Giants fan has got to appreciate these signs:

Because Tim Lincecum has a gross smile.

Because Lincecum is a big weed enthusiast.

Because Tim looks like a hippie with his long hair and because last time he was in Philadelphia, he sat on a trash can while signing autographs for fans.

Now this one has something to do with his personal hygiene or the fact that opposing teams don’t like to admit that he is good at baseball.

As stated above, Phillies fans didn’t stop at Game 1 with just Lincecum, they brought the Regina George-esque signs back for Game 2 to rip on former Phillie Pat Burrell. bwin

These signs should be just as appreciated as the Game 1 signs:

Because Pat Burrell apparently wets the bed. Not sure how that guy knows that, but let’s just run with it.

Because they misspelled hippie in the Game 1 signs.

Because that guy wants Pat Burrell to think that his wife cheats.

Because Pat Burrell is either pigeon toed or he, literally, has toes of a pigeon. I’m guessing the first.

Moral of this post, when playing in Philadelphia, be prepared to not only beat the Phillies but their fans and their insensitive signs as well… whether they’re spelled correctly or not.