Well, it’s the middle of July. Which means two weeks from today, it will be three weeks until college football kicks off.

We better get ready.

Oregon seems to be ready as they unveiled their new uniforms for the 2009 season. And it’s a good thing too. It’s been forever since the Ducks have gotten a new wardrobe.

With this year’s new addition, the Oregon Ducks now have up to 80 different uniform combinations. It’s official Oregon is the most metrosexual team in the country.

With as many different combos that they have, they make every other school’s wardrobe look like Doug Funny‘s. 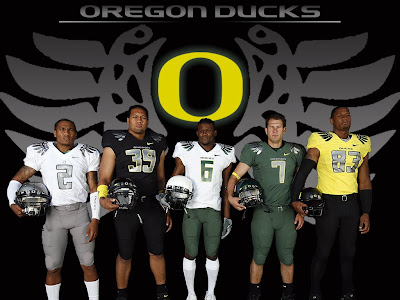 If you notice, Oregon has done away with the diamond plate design on the sleeves and are replacing it with an R. Kelly design of wings that help them to “Believe They Can Fly”.

It’s like Oregon really liked it in 1999 when the MLB debuted their “Turn Ahead The Clock” campaign so they decided to try it. Only no other school in America wants to join them.

Oh well, Oregon fans, if you don’t like the new threads… There’s always next year.

Honestly, if I played football in Eugene, I would rather play naked.

Of course, if I played football ANYWHERE, I would rather play naked.