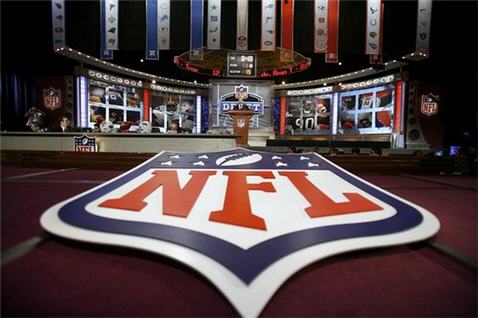 If you’re not like me, you probably have a life and didn’t spend countless hours watching the 2011 NFL Draft from your couch all weekend. Instead, you probably took advantage of the nice spring weather and did something useful with your life. Luckily, I did watch a majority of the Draft coverage. No, I wasn’t watching in hopes that my favorite college team would get more than one player drafted this year. Of course that’s not why I was watching. Why would you even think that? I was watching so I could give all our loyal Korked Bats readers a quick recap of the 4 Biggest Moments (in my highly valued opinion) at the 2011 NFL Draft. Here goes:

4. SUBWAY made a sculpture of Mark Ingram’s upper body out of their Orchard Chicken Salad for some reason. Don’t believe me? Here’s proof:

3. The Patriots traded their 193rd pick to the Eagles for their 194th pick. That’s it. The trade was made up of nothing else. Advantage: Eagles.

2. The Bills drafted the large mammal pictured above below (he’s the one on the left). The Bills decided to take Michael Jasper from Bethel University in the seventh round after the once 448 pounder (just this past January) lost 75 lbs. at the request of the Bills. Despite his size, Jasper lettered in three sports all four years in high school basketball, football, and track & field. He can dunk a basketball. He started at defensive line, guard, fullback and even kicker in high school. He can do over a 9 ft. standing long jump. He is shaping up to be one of my favorite players ever.