Penn State knocked off Purdoo-doo in West Lafayette tonight, which was an impressive come-from-behind win. But it was even more impressive when you consider what was coming-from-the-behind of their quarterback, Sean Clifford. He left the game because of diarrhea…………… allegedly. It can’t be proven for sure. And there’s no true way to tell other than him leaving the game mysteriously, the suspicious answer to the question above, and well, this throw.

Woof. That was definitely a poop throw. For sure. But Sean and the rest of the Shitney Lions got the last laugh with a late go-ahead score that ultimately sealed the game.

Surprised they didn’t go for 2 after.

It’s your age-old classic story of your quarterback needing to poop before he can focus to lead his team back to victory. We’ve seen it time and time again. Plus, it’s not like Penn State could leave him in a game where they’re wearing their all-whites. Could you imagine even the slightest of skid marks on those things? Instant virality for all the wrong reasons. And a school like Penn State doesn’t need any bad P.R. (P.R. standing for poop relations).

But then again, maybe it was just something in the West Lafayette water, because Sean wasn’t the only one letting bodily fluids leave his body during the game.

Throw up, hammer down.

Now, head coach James Franklin referred to Sean leaving the game as “cramps” in his postgame interview and presser, which was probably the play.

But the way Sean answered his question screams a dude who nearly dookie’d his pants. You could even see a bit of a smirk at the end of his answer hinting that he pulled a Paul Pierce of sorts. Or maybe even a Lamar Jackson, if you will. Which, let’s all now take the time to remember Lamar’s tremendous poop game. 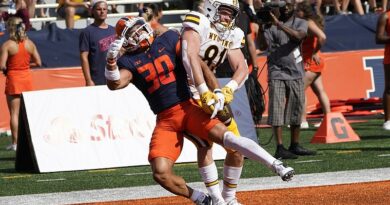