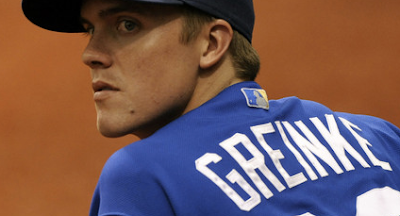 First and foremost, congratulations. You are beyond deserving. You are hands down the best pitcher in baseball. Your statistics blew everyone else out of the water. Even beyond the normal statistics, beyond the ERA and the WHIP, when one looked at statistics often less measured, you were in a different ballpark (presumably striking out hitters there, too). You were better against All-Star hitters than any other batters. Your ERA got lower as you faced batters for a second and third time in a game. It took you ten pitches to get out of an inning of the All-Star game. You struck out a batter on a pitch that ended up hitting him in the foot.
Embarrassing.
Fooled.
Dumbfounded.

All words that described batters after facing you. Yet, all year, one word rose above the rest to describe your pitching. Filthy. Now, if they didn’t know already, the entire country knows you are the best pitcher in the game. But that’s not why I’m writing you. I’m writing you to say thanks.

I’m a Kansas City sports fan. Diehard Royals. Diehard Chiefs. I lived through the 90s and now the first decade of this new millennium, two decades in which only one word resonates through the Kansas City sports community: disappointment.
My friends and I speak of 1985 like we were there, though few of us were born at the time. We hold the World Series victory as our one true victory as KC sports fans, a victory three years prior to when I would first rock my powder blue Royals onesie. 2003 was the year of the fan in Kansas City. The Chiefs went 13-3, Priest ran wild. The Royals had the most magical season of my lifetime. But still, no victory. Nothing to boast come awards season. When I reflect on 2003, it’s as though we won the World Series, as though Kansas City was the center of the sports world. But in the big picture, nothing.
I’ve seen the Royals have potential. I’ve seen that potential lead to heartbreak, and I’ve seen that potential leave for bigger and brighter. I’ve said goodbye to Damon and Dye, seen Beltran head for the National League. I had an awkward goodbye with Sweeney. I remember Angel Berroa amounting to nothing. I saw Juan Gonzalez and Benito Santiago wearing the Blue and White. I’ve seen Tony Peña Jr. take the field over 100 times in our uniform. I’ve seen more managers than I can name. 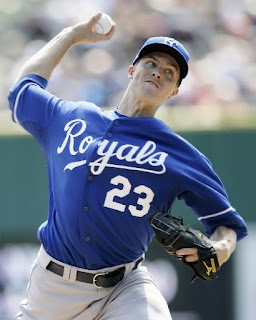 I have been a constant advocate for the “every team gets one player in the All-Star game” rule.
I’ve celebrated 99 loss seasons.
I’ve lived to see the greatest Royal of all time go down in history as that guy who confessed to “shitting his pants a couple of times a year.” His words, not mine.
Every year has been “the year,” until June, at which “next year” was “the year.”
And then there is the Chiefs. I’ve seen winning seasons. I’ve lived good years. I saw Joe Montana up close, Marcus Allen jump over pile after pile into the end zone. I saw Derrick get 7.5 sacks… In one game. I lived Marty ball. I saw Neil Smith at a Waffle House and about pissed my pants. I saw us dominate the Raiders. Over and over again. Priest is still a god as far as I’m concerned. In 1997 they drafted my hero, some basketball playing tight end from California. But, like the rest of my KC sports life, there was a downside. A massive downside.
Lin Elliot had best hope that we are never in the same place at the same time. My father still mutters “looks like Bono,” anytime Cassel makes a bad pass.
I remember where I was on February 8th, 2000. I was holding back tears after hearing about Derrick Thomas. In fact, I’m holding back tears right now, just writing about him.
I saw Trent and Priest go down. I bought into the Larry Johnson kool-aid. I’ve seen all eight wins we’ve had the past two-plus seasons. I’ve debated the following questions: “Who is a better starting QB, Huard or Thigpen?” I watched Hard Knocks just to see Brodie Croyle’s wife.
I have to watch Jared Allen rope calves and rock the mullet, all in Viking purple.
I have footballs signed by Tamarick Vanover, Bam Morris, and Andre Rison. Those same signatures are on some paperwork at Leavonworth Penitentiary.
I’ve lived the life of a Kansas City sports fans.

And here you came, in a year where the Chiefs let the best player in franchise history, the best at his position of all time, head to Atlanta, there was some magic in KC. Thank you. A year where the Chiefs were coming off a 2 win season, and apparently right back into another one, there was some magic in KC. A year where the second leading rusher in franchise history dropped a gay slur twice in three days, calling out his coach and fans alike, all before he finally left town. Yet you brought the magic.
Once every five games, you brought the magic. Once every five games the city would unite to watch you, and you never failed to bring your stuff. Night in and night out. The cover of Sports Illustrated couldn’t jinx you. The dreadful defense couldn’t throw off your game. The lack of offense couldn’t have worried you less. Batters looked ahead in their schedule to see if they could avoid you on trips to KC. I saw you strike out Morneau and Mauer back to back. I saw 15 strike outs. I saw your first eight starts eclipse anything anyone had ever thought possible. I saw you finish strong when the rest of your team (sans Billy Butler) had seemingly cashed it in for the year.
And I saw you do it all with a certain sense of pride and accomplishment, all alongside your humble persona. You never once called your team out, but many times could have, justifiably. I know I called them out for you. Even after winning the Cy Young you said you thought Felix Hernandez deserved more votes. Class.
And in top Kansas City sports form, I saw the most talented player on the Chiefs attempt to draw some attention on your day, convictions of performance enhancers. He failed. This is your city now.
I saw you have the most magical season I’ve ever seen out of a Kansas City sports figure. We all did. Thank you.
Thank you,
Kyle Ayers
P.S. Congratulations on your upcoming wedding. Only fitting.

One thought on “Dear Mr. Greinke”