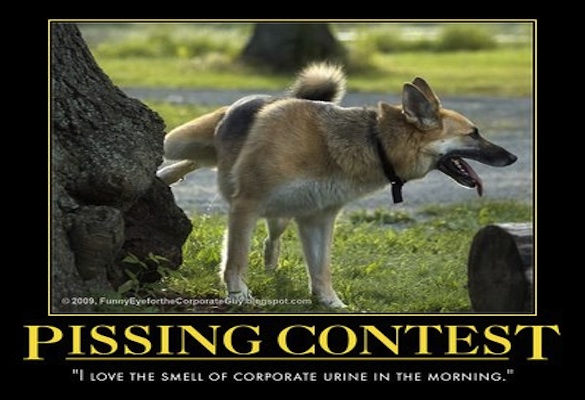 It was a sunny afternoon at the ballpark and my team was up six in the bottom of the 8th. I was feeling good, and although we were sure to win, I was to superstitious to leave until the game was completely over.

I was enjoying an ice cold $13 beer when I noticed that two older gentlemen behind me talking.  Since my team was up so significantly, I decided to eaves drop and see if their conversation was worth listening to. As it turned out, it was.

I’d put these fellas between 40 and 45 years old and married and/or divorced. They seemed like friends, but not old friends. They were more like the kind of friends that end up going to a game together because all of their other friends backed out at the last second.

Back to the conversation.

It started out relatively harmless,  with a few subtle brags here and there. Before I knew it though, these two guys had launched in to a full-blown pissing contest. And I had front row seats.

“I just bought a condo down in Key West,” said guy #1 to his unimpressed associate. “Key West, eh?” replied guy #2. “I love Key West. In my opinion, it’s second only to St. Barts.” It was a hell of a power play, Downgrading guy #1’s gloat to nothing, but he wasn’t finished.

“St. Barts?” said guy #1, “I’ve actually never been there.” Guy #2 saw his chance to strike, and he did: “Well, I actually just bought a house down there, you and your wife should come visit sometime. I live down there all winter long.”

“Well, we’d love to come and visit, but next winter we’re planning on traveling in Europe for a month,” said guy #1 in an effort to regain some control.

“Oh, I love Europe! Well, at least the cars that come outta there… just bought a new Porsche.” said guy #2.

“I used to have a Porshce,” retorted guy#1, “But it just wasn’t fast enough for me, and they’re kind of girly, ya know?”

“They can be a little hard to handle, ” said guy #2, “but once you figure it out, there’s nothing like it. they’re definitely not for everyone though…”

At this point I could not pull my ears away. The opposing team had come back within a run in the top of the 9th, but I didn’t care. there were two grown-ass men behind me trying to constantly one-up each other.

As the batter popped-out to end the game, guy #1 and #2 simultaneously got up and offered to take the other one out for drinks.

Guy #1: “Now, you brought me to the game, I insist on getting the drinks. Besides, I just got a raise last week.”

Guy #2: “Raise?? I just got a divorce last week so I’m celebrating my freedom! Drinks are on me…”

The two men walked on into the crowd, their voices trailing off into the clutter of ballpark ambiance.

I wont forget those two, and I don’t believe a word that either of them said.