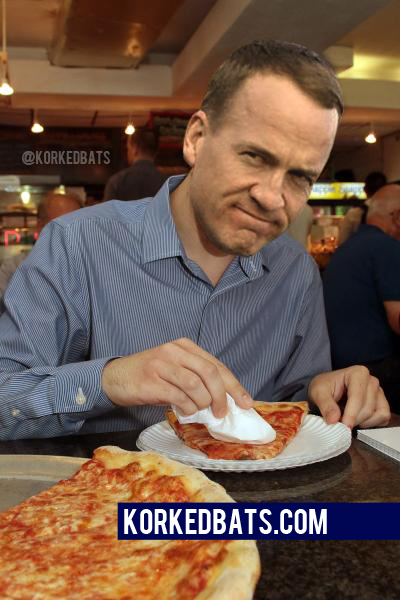 SAN FRANCISCO — Over the past season, many Peyton Manning critics have emerged, upset with how often the Broncos quarterback dabs his pizza, and now his antics have sparked a debate ahead of Super Bowl 50.

In an effort to eat healthy, many NFL players have started dabbing this season. Grease will often create puddles on top of pizza slices causing players to remove it by dabbing with a napkin or paper towel. مراهنات كرة القدم  However, many claim Manning’s dabbing is becoming too much.

The habit started a few years back when Manning purchased his first Papa John’s franchise. Some close friends of the quarterback claim that was the moment when he developed such a big head. “Well, that, his receding hairline, and all the HGH he takes,” one friend said.

Those who are unopposed to the amount of dabbing Manning does say that if you can’t stand him dabbing, then keep him from buying pizza. “Frankly, I don’t have a problem with his dabbing,” one NFL linebacker said. “And if anyone does, they just need to do a better job of keeping him out of The Endzone. العاب القمار ” The Endzone is a local pizza joint Manning frequents when he’s not at Papa John’s.

The debate of whether or not Manning dabs too much has sparked a never-ending debate during Super Bowl week, to the point where even his Super Bowl 50 foe, Cam Newton, weighed in, saying, “I’m actually ok with how much he dabs. اندرويد كازينو ”